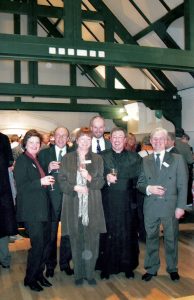 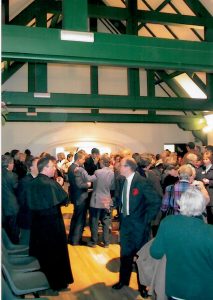 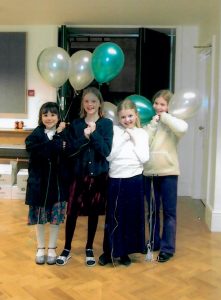 “I am happily transported back 20 years ago to that wonderful party when we celebrated the opening of the new hall! I remember it well.

Pre-2001, Orchard House made good use of the original hall but we used to dream of better conditions and more imaginative use of the space. Along came the School’s trusted friends, Oliver and John, and I was introduced to the term Narthex. My knowledge of the names of the archangels was tested and Raphael and Gabriel became part of the School’s daily vocabulary. Oliver and John consulted with us how we could use the ground floor space during the day; the larger area as a classroom for the Den, our three year olds, and the room behind as a music room.

The Michael Room above was to be for Chiswick and Bedford Park School but we enjoyed a positive arrangement with them and upstairs became the venue for small productions over the years. In time, the School moved the Den down the road, to what had been Wendy Wisbey’s Studio and Bob’s Surplus Store, and Orchard House used the Gabriel Room as an art room.

How thrilled we were with the new accommodation, including the modern loos and kitchen facilities!  On occasion, music from the church would waft through to our rooms, and we could assemble our pupils ready to process in for their annual carol service. I send my best wishes to the St Michael and All Angels community, and wish them many more celebrations in the years to come.”

“My first memories of St. Michael & All Angels’ Parish Hall date back to the late 1980’s when I was allowed to set up Chiswick & Bedford Park Preparatory School’s first after-school drama club in the large ground floor hall. The original hall, as can be seen from the photographs, oozed atmosphere and I was ‘over the moon’.  Very exciting except for the splinters!  Huge wood splinters that pierced the ‘derrières’ and fingers of little children.  The school supplied a 5-inch pair of Victorian tweezers (to extract the monster splinters!) and a tube of antiseptic; the children were asked to wear gloves.

In 2001 the purpose-built Michael Room, in the restored Parish Hall, changed the teaching vista of our school.  We had space – wonderful space – plus use of loos, a kitchen, storage and under-floor heating.  Drama, music, dance, games and physical education thrived.  Assemblies blossomed on Mondays and Fridays: C&B pupils and staff gathered together to pray, to sing and often to watch a Form or House production. Visitors were invited to the hall to talk or give workshops to the children: for example, The Royal Shakespeare Company and a range of science-related programmes as well as writers, artists, singers and musicians.

The freshly white-painted hall walls and the unblemished wood flooring was, initially, a tad daunting.  Instructions were given not to scratch the floor or daub finger prints on the walls. The children now wore trainers rather than gloves for their lessons. My idea for the first lesson with a group of 6-year-old was irresistible. Each child was given a huge, imaginary, tin of thick paint and a large brush.  They could choose the colour and were asked to paint their initials over the walls.  After that they walked the rainbow-coloured paints over the polished wooden boards.  By the end of the lesson each child’s uniform was speckled and splattered with coloured paint. The hall was a disaster. It was a stunning start. 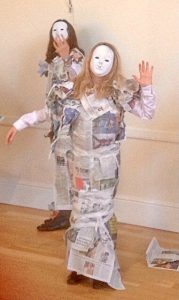 Soon the wonderful space turned into imagined underwater kingdoms, jungles, circus tents and, at Halloween, a School for Little Witches.  A magic spell opened the green rafters and the apprentice witches swirled out and peered through the windows of their school.  The Headmistress was livid; each year she scolded me for sanctioning this atrocity – how the children loved it.

Albert, a Victorian coal miner, visited year 5 every autumn term.  He told the children about his work in a Welsh coal mine…. miraculously his mine appeared, complete with coal seams.  The miners lay on their backs and wielded heavy picks until there was a violent EXPLOSION.  The Michael Room survived unblemished, as it did when the Romans vanquished Boudicca and Howard Carter opened Tutankhamun’s tomb.  Yes, all this happened and much more during the year 2001-2002 in the Michael Room.

Throughout the years, the various Parish Managers in the Office have been supportive and helpful at all times – the noise that cascaded from our lessons must have been quite deafening on hot summer days.  Thank you, everyone.  A particularly big thank you to Anna Benson who was ready to ‘pick up the gauntlet’ and always gave me and my groups a cheery welcome.”

“Teaching all my lessons, orchestras and choirs in the Raphael Room, there were times when I felt I lived in the parish hall! So many lovely memories of my time there; the annual fire risk of lining 100 children up with lit candles in preparation for the procession that marks the start of our Carol Concert; opening the doors between the Gabriel and Raphael Rooms to choreograph showstoppers for our end of year productions; and sneaking in some ‘Dutch courage’ with the OHS parent choir before performances (mojitos before our rendition of ‘Guantanamera’ was a particular highlight). Particular praise and thanks should also go to the incredible office staff who were always so patient with endless cacophonous lessons of African Drumming and small group composition work!” 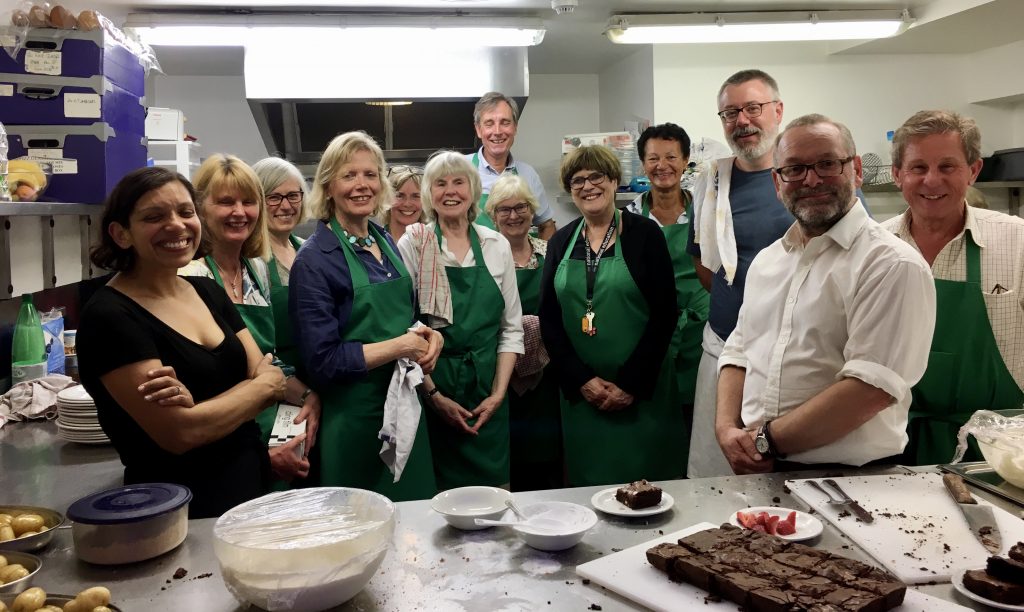 “For Oliver West and myself, the hall project stands as a proud achievement at the conjunction of our professional and community lives. If ever there were a project where the result justified the effort, this was surely it. It certainly was effort, and at times an emotional rollercoaster… but what a lot of community life it has accommodated and enabled in the ensuing 20 years (and without the children getting splinters in their hands and bottoms, as they used to in the hall as it was before). I wonder how many of us can recall those awful gas heaters, and the clattering noise they made when they were turned on? I hope the anniversary resonates with those who are there, particularly all those instrumental in seeing it through to reality, and I look forward SO much to the time when we can all gather there once more…  without distancing, face masks and fear.”

“I remember coming for my interview at St Michael’s in December 2006 and being shown round the halls by Sara Pask and marvelling at the incredible, modern space.  I was familiar with church halls – of the concrete floor, corrugated tin roof, brown paintwork and inadequate heating variety.  St Michael’s halls were like no church halls I’d ever seen.” 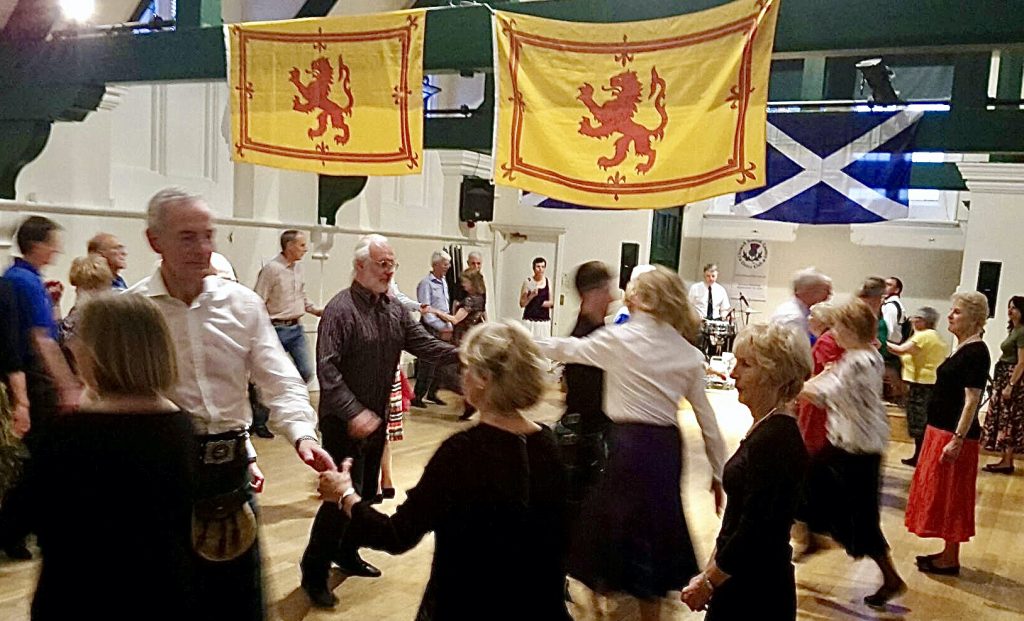 “I liked the bright venue very much – brick, visible timber work (perfect for flag hanging) with a lovely wooden floor to dance on and a surprise element about arriving. From the street one might not realise anything was happening within, then, opening the lower doors revealed music and sometimes an excited murmur. Now the stairs were steepish to the upper hall so it was always a deliberate climb then to peer over the landing edge as one emerged to all at once, discover who was there, what dance or which teacher and for live music who was playing. Although, usually arriving with some advance knowledge – nevertheless it was still a nice surprise to take in the scene at one glance. Paying the night fee and sometimes being given a welcome glass of wine (for special evenings), coat off and dancing shoes on I was ready to socialise with those nice people. The evening always passed quickly as is the case with enjoyable things and even after tidying up there was a drink to finish with across the road in the local hostelry. An all-round good evening and being a Sunday still a week of dancing to come! And afterwards, an easy clear road drive home.” 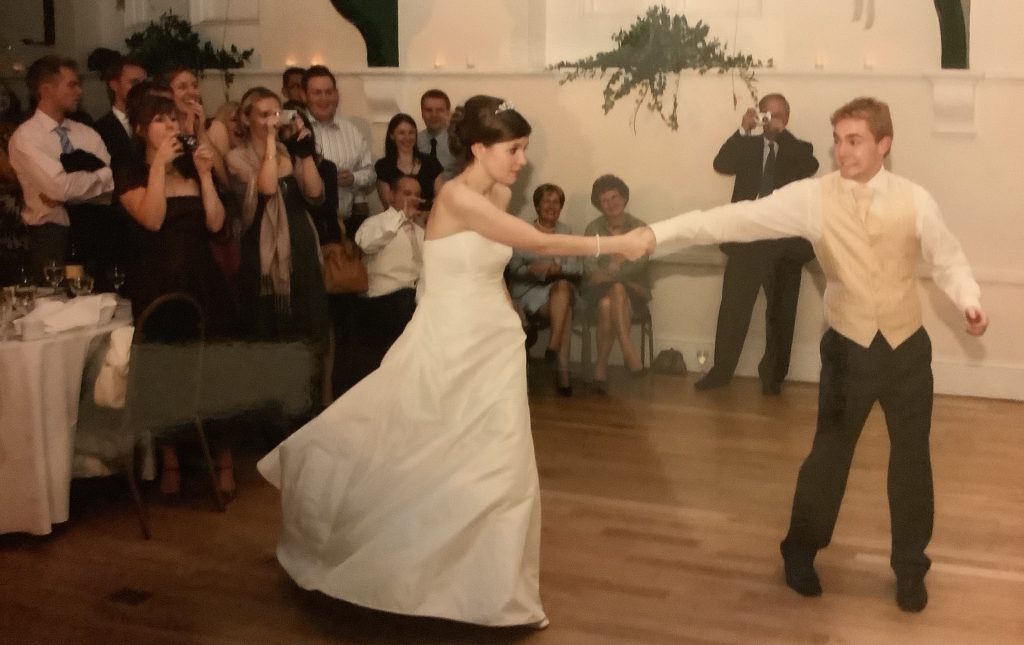 “The new Parish Hall is a great place for parties. My 70th birthday coincided with Easter Day and I have wonderful memories of champagne and cake in the Raphael Room. downstairs in the Hall – the perfect space for everyone to gather after the church service. Easter Day being a bit too busy for a proper party, I held that a few weeks later, upstairs in the Michael Room. My favourite treat is afternoon tea with all the trimmings and that’s what I organised: lacy white table cloths, bone china and cake stands, all set out to complement the delicious sandwiches, scones and cakes, made and served by my lovely caterers and with a string trio playing gently in the background. Very ‘Palm Court’! Of course, we had champagne too, in large quantities, for my 50 or so friends and, with lots of space round the walls to hang photo boards of my life, that caused a lot of laughter and ribbing. I still smile at the caption contest responses! I don’t think the Ritz could have done it better.” 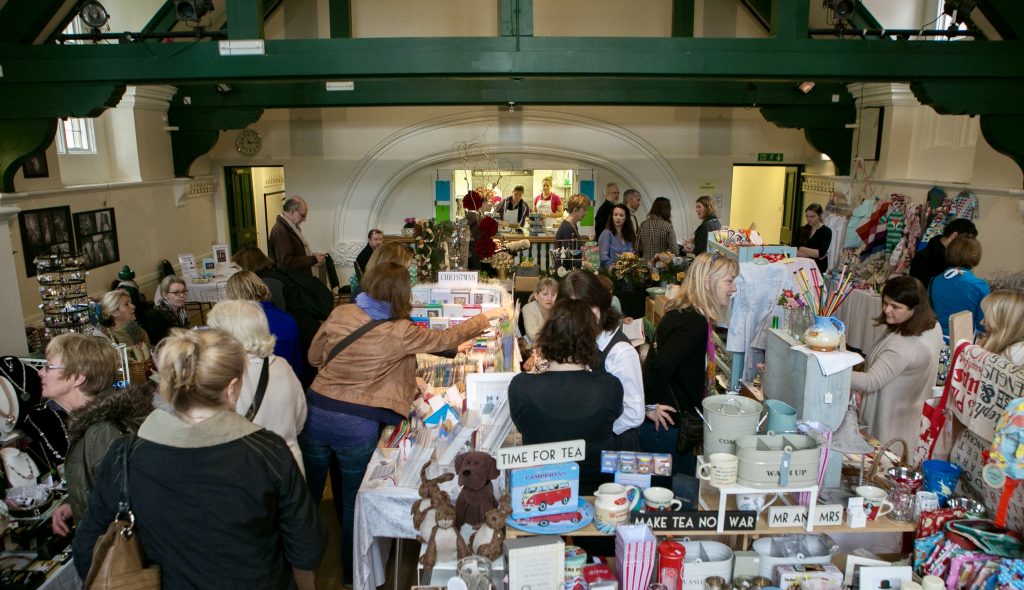 “The ‘Chiswick Homeware and Gift Show’ in 2013 was the start of many pop-ups around Chiswick that my then vintage and antiques business, Wilson Picks, organised. St Michael and All Angels Parish Hall made a perfect setting for a Christmas Fair! We got off to a bit of a rocky start for the first fair as the caretaker hadn’t shown up to let us in. Placating 20 anxious stallholders with calm reassurance, but quaking a bit inside, we eventually found a keyholder and got in. With half the time allocated to set up, we all got great exercise carting boxes of goodies and decorations up the stairs and we somehow managed to get the doors opened on time at 10.
The Hall looked so festive and welcoming. We had a section for tea and cake served on our vintage china cups, saucers and plates. All the stalls were so jolly and radiated Christmas and the purchases flew off the tables. We also had a corner for antique valuations which also proved very popular.  We have great memories of successful Christmas Fairs in the Parish Hall and we so appreciated all the help and support from everyone there!”

“I started attending Pilates classes in the Hall before we had anything to do with Pilates In Chiswick. I had damaged my knee chasing one of my children up a rope climbing frame just after we had moved house. A local osteopath then recommended that I should try pilates. Both Anne and myself started attending. After a few years we were due to start a new course but didn’t have much money at the time so decided to skip. Sally rang up to see what was going on and, to cut a long story short, we ended up becoming the new owners of ‘Pilates In Chiswick’ in 2003. Since then we have been using the Hall every Wednesday morning during term times until the first Lockdown last year. We also started Tuesday night sessions in January 2010, again sadly not running at the moment. Our pupils and teachers love the space, in fact some of them have been with us ever since we started!”

“We would never have expanded the Bedford Park Festival – or launched the Chiswick Book Festival – without the rebuilding of the Parish Hall. As well as providing a terrific events venue in the Michael Room, and two downstairs halls to welcome people over drinks, it enabled us to make full use of the church for concerts and author talks. One of the most popular Book Festival regulars has been the Chiswick author Tim Marshall, who spoke about his book Prisoners of Geography in 2015 (above). After many weeks at the top of the Sunday Times bestseller list, we had to move his sessions into the Church! And at the Bedford Park Festival we’ve also had great speakers such as Deborah Cadbury and Roy Hudd (below).” 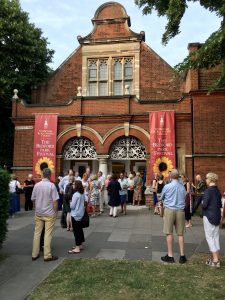 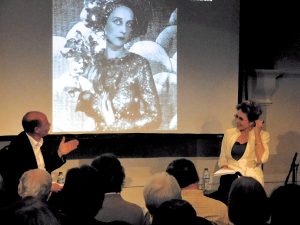 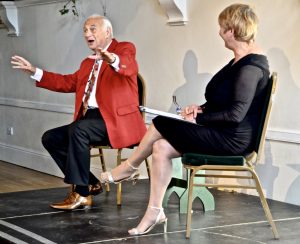 Back to: History of the Parish Hall