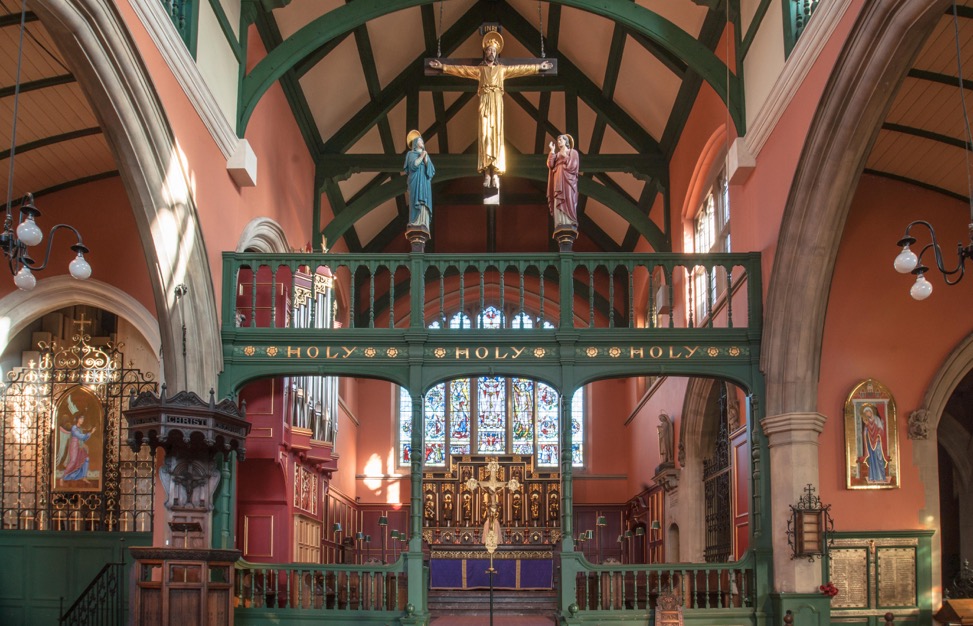 You may click the photographs to enlarge them and see the art in more detail.

1. The Rood Screen and other war memorials

The Rood Screen is the Parish Memorial. ‘The Holy Rood in Memory of those Fallen in the War’ was unveiled on Saturday 28 September 1918, on the eve of the Patronal Feast of St Michael and All Angels.  The bronze plaque on its right, is inscribed with the names submitted by the congregation of the 91 Fallen from the Parish, and was finalised some months later in 1919.

In the church there is also a Memorial Plaque to the 4th Territorial Cadet Battalion (‘the Lads Brigade’).
Outside the Parish Hall is the Bedford Park Memorial Seat.
.

The two icons to the left and right of the rood screen depict the Annunciation (click them to enlarge the images).

The Archangel Gabriel and the Mother of God are engaged in a conversation and the roof above Mary is based on the roof of St Michael & All Angels Church (right). They stand either side of the altar to show that the Annunciation happens not only historically but also in our daily lives.

They were painted by Aidan Hart, the panels were made by Dylan Hartley, and the gilding executed by Imogen Maxfield. Read about their meaning and how they were made here: The Annunciation Icons and Wrought Iron Screen for St Michael & All Angels, Bedford Park, Chiswick. Read more, and see many more images, on Aidan Hart’s website. You can listen to him speaking on BBC Radio 4 in ‘The Creation of an Icon – Halos’.

The Wrought Iron Screen behind the icon on the left was hand-forged by master blacksmith Frazer Picot of Shropshire. Read more and see more images here.

St Michael and All Angels Bedford Park was consecrated in 1880 and the first of its stained-glass, the East window, was added in 1887. The last was installed in 1952 – a replacement, in fact, for the East window which was destroyed during the war. During Lent 2021, Fr Kevin Morris gave a daily reflection on the stained-glass windows, starting with the Hierarchy of Angels (above), which is situated immediately on the left as you walk into the church. You can read all the reflections here, including details of those in whose memory the windows were created. 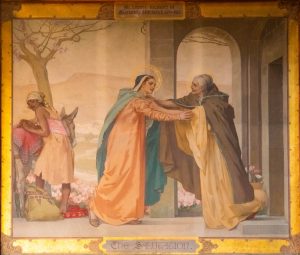 In 1922, James Clark was commissioned to paint a memorial mural to be placed in St. Michael and All Angels, Bedford Park.  The work was painted in spirit fresco medium but it was not then stuck to a wall.
The Salutation depicts the Visitation of the Virgin Mary to her cousin Elizabeth, the mother of John the Baptist (right, click to enlarge the image) James Clark rose to fame in 1914 with a painting entitled The Great Sacrifice. It was described as “the most popular painting of the war”. 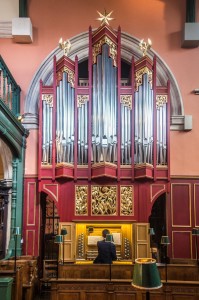 The Organ (left, click to enlarge the image) has made a huge difference to our worship and concerts. It was played formally for the first time – and blessed by the Lord Bishop of London – at a special service of Thanksgiving on 26th September 2013.

The organ was built in Switzerland by the specialist firm La Manufacture d’Orgues St Martin. It has 1,667 pipes, many of which were sponsored by individuals and groups under the church’s Pipe Up! appeal. Other funds were raised from the Bedford Park Festival, fund-raising Balls and a Hymnathon.

Work began in July 2012 and our new organ was ready for its first performance in September 2013, after more than six years’ planning and fundraising. It was a huge project in terms of the time it took to make detailed plans and carry them out; to raise the considerable funds; and then build and instal it.

You can read more about the History of St Michael & All Angels on this page, and see more pictures, on St Michael’s World War 1 Project website, the Victorian Web website and the Bedford Park page of this website.