The most exciting development in the music of the Church in recent years has been the building of our new organ, together with two meeting rooms in the vestry and sacristy. The organ was blessed by the Lord Bishop of London at a special service of Thanksgiving on 26th September 2013 and has been a huge project in terms of the time it took to make detailed plans and carry them out, and to raise the considerable funds.

It might seem to have been a brave decision, given the current climate, even a selfish one with so many people in need. But we are convinced that since something had to be done, it behoved us to do it well, and to create something of value not just for us but for future generations, just as the founders of our Church did for us.

Worship, in which music plays a central role, is at the heart of who we are; it challenges us and guides all our activities. This great project has transformed St Michael’s, its music, its worship and its whole life; it is helping all of our activities to flourish. The fund raising continues to pay off our final loans. 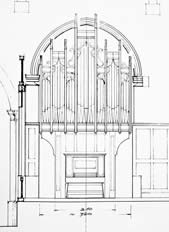 Four organ builders of international stature visited the Church and made detailed proposals. Our adviser Dr John Rowntree, the PCC and I agreed that one builder stood out for its inspired design and the quality of their instruments: St Martin of Switzerland. Detailed architectural plans were prepared (see detail, right) and were submitted to the Diocese and the Victorian Society.

Work began in July 2012 and our new organ was ready for its first performance in September 2013. After more than six years’ planning and fundraising, it was played formally for the first time at a service of Thanksgiving in the church on September 26th 2013.

The Choral Mass included Langlais’ Messe Solennelle and Tavener’s God Is With Us, with singing led by St Michael & All Angels’ choir. Refreshments afterwards celebrated the completion of the project. The organ was blessed by the Bishop of London, the Rt Revd and Rt Hon Richard Chartres.

“This was a very proud moment for us” said Fr Kevin. “It’s the culmination of six years’ planning and fundraising, to replace our old organ with a magnificent new instrument that will enhance our worship and bring joy to our congregation and to concert audiences for many years to come.

“It’s been a huge effort on the part of many people. The service gave us the chance to say thank you to them and we were delighted that the Lord Bishop of London came to bless the organ and officiate at our Choral Mass of Thanksgiving. It was a wonderful occasion and we were delighted to see so many people there including 2 members of the organ building team from Switzerland”

The organ was built in Switzerland by the specialist firm La Manufacture d’Orgues St Martin. It has 1,667 pipes, many of which were sponsored by individuals and groups under the church’s Pipe Up! appeal. Other funds were raised from the Bedford Park Festival. fund-raising Balls and a Hymnathon.