The 2020 Bedford Park Festival ran online from Saturday 13th and Sunday 14th (Green Days weekend) until June 28th 2020 (Festival Mass and Open Gardens). You can catch up with many of the events on the Festival website. The Festival (pictures above) is organised annually, and underwritten, by St Michael & All Angels on behalf of the community, with profits going to its nominated charities and the church.  More details on the Festival website.

Over 50 years of Festival fun
In 2016 and 2017, we celebrated 50 years of the Bedford Park Festival and its opening Green Days fete. See 50 years of Green Days photos, decade by decade. You can see a history of the Festival, and reports of Festivals and Green Day before 2013, here; reports about some recent Festivals here; and winners of competitions, including Win a Meal, here.

In 2016, we welcomed back celebrities who have opened the Festival over the years to open the 50th Green Days fete (see celebrity selfie above). 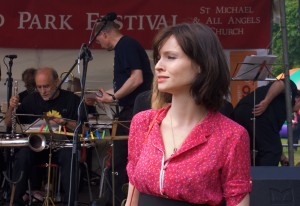 Sophie Ellis Bextor (right), Jeremy Vine, Phyllis Logan, Rageh Omaar, Sarah Greene, Susannah Simons, Gavin Campbell, Mary Nightingale, Alice Arnold and Fergal Keane were joined by others, including Lord Young of Cookham who, as Sir George Young, was the local MP for many years and regularly opened the event in the 1970s, ‘80s and early ‘90s.

Annie Briers, who came to Green Days regularly with her husband Richard and their daughters, was also there, as was Fr Kevin Morris, the vicar of St Michael & All Angels, which has organised the Festival for 50 years.

Sophie Ellis Bextor brought the day to a memorable close, singing a couple of songs on the Bandstand at 6pm, with Ed Harcourt on keys.

Hayley Mills, who opened the Green Day fete in 1981, sent a good-luck message which was read out at the opening ceremony along with those of several others.