What are the St Michael’s Book Clubs?

We are now 2 groups, each of about ten (men and women) who love reading and who welcome the opportunity to widen our literary horizons by meeting on a regular basis over a drink to discuss books we have collectively chosen to enjoy.

The initial group (Book Club 1), chaired by Jane Thomson, meets at 8pm in the St Michael’s Parish Hall on the fourth Wednesday of the month, with the exception of June and December.

2011 books were (* proposer)
February 23rd: The Other Side of Me – Salley Vickers (*Wendy Callister) 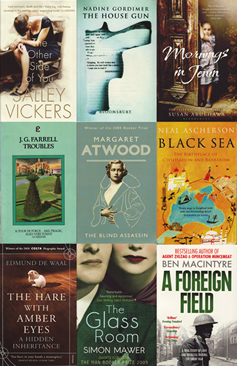 A second Book group (Book Club 2) was set up in Autumn 2010 initially chaired by Jane Blanckenhagen and now by Tassy Russell :
It meets monthly on Mondays in the Parish Hall at 7.30pm. Please contact Tassy Russell via the Parish Office for further details

Jane Blanckenhagen, who chaired the second group, wrote in 2011:

“Initially just four of us started our joint reading journey and we now meet monthly on Monday evenings (see above). To start with we chose books by vote just a few at a time, so enabling new members to have a say in what we read. Our purpose is primarily social but we have all enjoyed reading a wide range of books as well as books we might never otherwise have opened.
We have quickly grown to ten members (men and women) and would gladly welcome one or two more……. Then maybe it will be time for Book Club 3 to take off…….”

If you enjoy literature then don’t miss the annual Chiswick Book Festival, hosted by St Michael el & All Angels. The next Festival will take place between 15 and 19th September 2016.

If you would like to learn more about the Book Clubs and maybe to join, new members are always welocme, please do not hesitate to contact Jane Thomson, or Tassy Russelleither personally or via the Parish Office.