“As well as staging weekly worship (every parish) should contribute to wider cultural projects such as local festivals, collaborating with other churches and cultural bodies. Every parish should have a creative wing, an in-house arts centre.” Theo Hobson: The Spectator, January 8th 2022
.

St Michael & All Angels is the parish church of Bedford Park, a residential area in Chiswick acclaimed as the world’s first “garden suburb”. The development owed much to the “Aesthetic Movement” of the 1870s, and attracted a community of artists, architects and writers, with its promise of a “village-like” community living in “sweetness and light” (read more below and on the WB Yeats Bedford Park Artwork Project website.)

More than 140 years later, the church sees the arts as a central part of its worship – through music, paintings and poetry – and its community outreach. It runs the annual Bedford Park Festival (founded in 1967 by the then vicar, Fr Jack Jenner), which saved the area’s Arts & Crafts houses from being redeveloped, and the Chiswick Book Festival (photo below). It also hosts many concerts, talks and other performances. See more: Artworks and other notable features in the church.

Fr Kevin Morris, the Vicar, says: “At St Michael’s we believe faith and the arts go together. The arts can lift the spirits and engender discussions with people across a wide range of backgrounds and beliefs.”

In his sermon, The Baptism of Christ: Engaging with the arts, Fr Kevin said: “It is my tradition on this Feast day to take three things: a picture, a poem and piece of music and to offer some theological reflections. I do this to encourage you to engage with the Arts in the same way. Perhaps all artistic endeavours involve a certain cost, a sacrifice, an exchange, a transaction. As we give ourselves over to profound listening, attentive looking, meditative reading we receive something in return which can be profoundly inspiring, insightful and transformative.”

St Michael’s is actively involved in ‘Exploring Chiswick’, a campaign encouraging residents to explore the area’s arts heritage by following the local trails – online (if staying at home) and on foot (if taking exercise). The trails can be downloaded to mobiles or computers, free of charge.

St Michael & All Angels is featured in three recent books about churches and buildings.

Bedford Park and the “Aesthetic Movement” 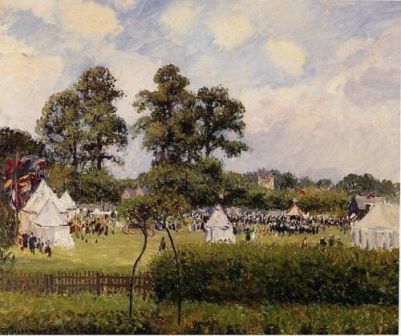 Bedford Park was acclaimed as the world’s first “garden suburb” and the development owed much to the “Aesthetic Movement” of the 1870s: it attracted a community of artists, architects and writers, with its promise of a “village-like” community living in “sweetness and light”. The influential Victorian architect, Norman Shaw, succeeded E.W.Godwin as Estate Architect for Bedford Park and designed St Michael & All Angels Church and several of its first houses, in a distinctive “Queen Anne Revival” style, using red brick and white joinery.

The area rapidly became a showpiece and was praised by William Morris and others. Notable resident artists have included J.B.Yeats, father of the poet W.B.Yeats; Lucien Pissaro, whose father Camille produced several paintings of Bedford Park (though some were actually in Stamford Brook, left), and T.M.Rooke, friend of Ruskin and pupil of pre-Raphaelite artist Burne-Jones. The artist Charles Ricketts told Lucien that ‘The elect of the art world’ were living in Bedford Park.

W.B. Yeats took inspiration from the area and wrote one of his best-known poems, The Lake Isle of Innisfree, in Bedford Park. Yeats is one of two Chiswick writers to have won the Nobel Prize for Literature and is featured on the Writers Trail, set up by the Chiswick Book Festival. The WB Yeats Bedford Park Artwork Project is installing memorial sculpture to him near St Michael & All Angels.