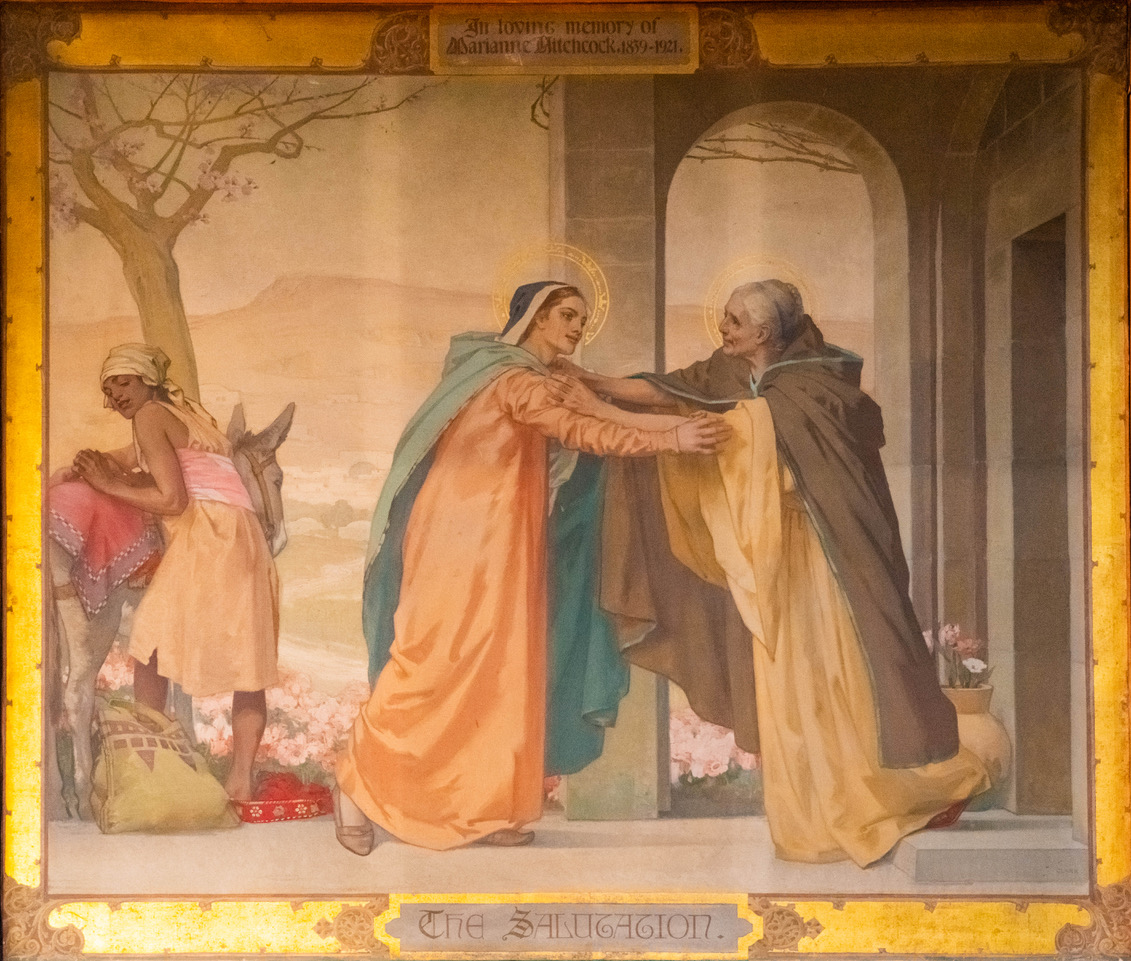 In 1922, James Clark was commissioned to paint a memorial mural to be placed in St. Michael and All Angels, Bedford Park. It depicts the Visitation of the Virgin Mary to her cousin Elizabeth, the mother of John the Baptist.  The work was painted in spirit fresco medium but it was not then stuck to a wall.

St. Michael’s had originally been built with rectangular landscape windows.  When a Church Hall was subsequently built on the north side of the Church, one of these windows was closed up leaving a recess in the north wall the shape of the window.  The mural was attached to a stretcher and then inserted into the recess.  Over time, the timbers of the stretcher have allowed dirt to accumulate on the painting in a differential manner, so that the timbers of the stretcher are now visible as lighter lines.

James Clark rose to fame in 1914 with a painting entitled The Great Sacrifice (right). Its idealised representation of a dead soldier at the foot of the cross became a popular print and was used as a war memorial in many public buildings, and in stained-glass memorial windows in churches. It was described as “the most popular painting of the war”, with its religious imagery providing “consolation to the families of dead soldiers” (George Robb, British Culture and the First World War, Macmillan, 2015 – source: The Victorian Web).

From 1915 to 1938, James Clark lived with his family at 44 Rusthall Avenue in Bedford Park. Though The Salutation was commissioned for St Michael & All Angels Church, the family attended St Alban’s Church in South Parade, closer to their home. See more: James Clark, The Great Sacrifice and The Salutation.

The Salutation was commissioned in memory of a parishioner, Marianne Hitchcock, who died in 1921. Born Marianne Horncastle in 1839,  she married Edward Edwards, a Chemist and Dentist, on 23 September 1869 in Hackney Parish Church.  They had four children: Edward Durham Edwards b. 1871, Amy Dunsford Edwards (1874), Mildred Edwards (1876) and Constance Edwards(1877).

Very sadly, her husband died in January 1877, presumably before the birth of his youngest child.  At the 1881 Census, Marianne was the owner of the chemists/ dentistry practice in Hackney with her young children. Living in the house was a manager, Samuel Conder Hitchcock, aged 37, a registered dental practitioner.
She married him at the parish church of St John on 25 February 1883.
Samuel Hitchcock died in 1915, after which his widow moved to 10 Woodstock Road, Bedford Park with the family, where she died on 13 September 1921. Edward Durham Edwards was her executor.  He and Amy were both registered as still living at 10 Woodstock Road in 1939.  There is nothing about them in any of the surviving parish magazines for the period, but presumably they were parishioners for nearly 30 years.