Reflections on themes from our stained-glass windows for the 40 days of Lent, by the Vicar, Fr Kevin Morris, and the Curate, Fr Thomas Couper.

Fr Kevin Morris writes: There is an oft-quoted story of a priest who asks a group of children: ‘What is a saint?’ Looking up at the church windows, one replied, ‘Someone who lets the light through.’

It is an excellent definition and, of course, a good example of the significance of stained-glass windows in the teaching of Christians through the ages. After all, such windows were not simply decorative but a medium through which the story of Christianity could be expressed. So, from the 7th century until the present day, stained-glass windows have beautified our sacred spaces and inspired our understanding of the Christian faith.

St Michael and All Angels Bedford Park was consecrated in 1880 and the first of its stained-glass, the East window, was added in 1887. The last was installed in 1952 – a replacement, in fact, for the East window which was destroyed during the war (see more below).

I hope these reflections inspire a greater interest in the history and theology of our windows and that you will take the opportunity to look at them more closely within the building itself. As we reflect on the themes of these windows, may we be brought closer to that Light which illumines the saints, and, which, we pray, may also illumine our own lives. May this Lenten devotion and serve to inspire our faith in Christ.

How to use these reflections in your prayer time

Click the links below to read the illustrated Reflections on our stained glass windows.
Photographs of the windows by David Beresford. Click the images to show them full-size.
– Read pithy summaries of the Reflections in our daily tweets.
– Compare the story of our windows with The Stained Glass Windows of St Nicholas Church, Chiswick

Beginning Lent by reflecting on angels is a fitting subject for a church dedicated to the Holy Angels. 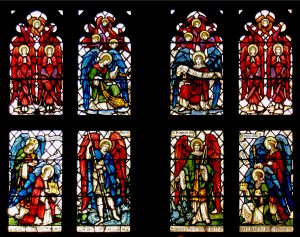 1. The Hierarchy of Angels

The Hierarchy of Angels (1911) – Ash Wednesday
The theme of this window (seen on the left, as you walk into the church by the main doors) is the ‘Hierarchy of Angels.’ It is designed by James Powell and Sons, who were closely associated with the leading Arts and Crafts architects and designers of the day, such as Burne-Jones, William de Morgan and William Morris. It was installed in memory of  Howard Unwin JP, a civil engineer (1837-1911) whose family lived at 1 Newton Grove and who died in February 1911. For 20 years he was Managing Director of the Earl of Shrewsbury’s company in London which supplied pneumatic tyres for Hansom cabs: the Shrewsbury and Talbot Noiseless Tyre Company.

Each panel is discussed in turn below. 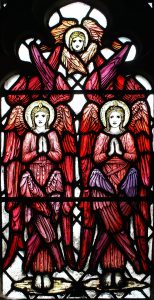 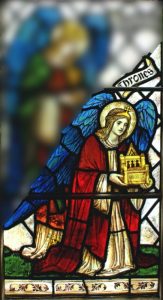 Click the links below to read the illustrated Reflections on our stained glass windows.
Photographs of the windows by David Beresford. Click the images to show them full-size. 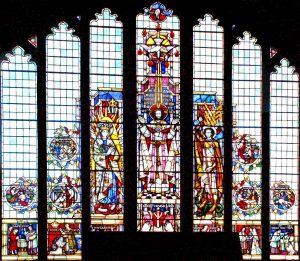 East Window (1952) – Monday in Week 2
St Michael’s was not directly bombed during the War but suffered from the blast of a flying bomb that demolished the Arts College in the Bath Road. Several stained-glass windows in the church were blown out and destroyed, including the East window. A new East window (right) was installed in 1952, the work of Lawrence Lee using a preliminary design of Martin Travers, a pre-eminent church artist of the Anglo Catholic movement, who died in 1948. Travers had lived for a while in the Bath Road, during which time he designed the St Michael window in the ‘All Souls Chapel’. 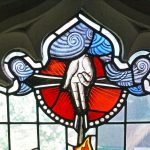 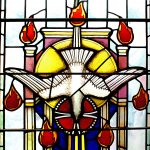 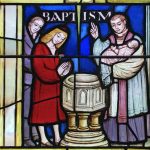 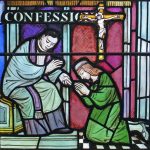 Photographs of the windows by David Beresford. Click the images to show them full-size.

These are the oldest surviving stained-glass windows in St Michael & All Angels, designed by Daniel Bell. The first Vicar of St Michael’s, Fr Alfred Wilson, who organised the building of the church, had in mind that its stained-glass windows would represent stories of angels throughout the Bible. Unfortunately, his vision was never fully implemented. Yet here, high up on the north side of the sanctuary, we have several of those stories, of which ‘St Peter in chains’ is one (shown right) and ‘The angel comes to rescue St Peter’ (left).  The inscription on the panelling beneath the windows reads ‘To the glory of God, the above window was erected as a Thank-offering by Juliana Frances Birch 1890′. Miss Birch, aged 40, was listed as a Mission Sister, lodging at 15 Paxton Road. She died in Dorset in 1917. 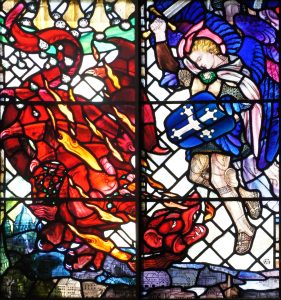 4. The All Souls Chapel windows

The ‘Michael’ window was designed by Martin Travers (a local resident, now believed to be one of the most influential British stained-glass artists of the 20th century) and was dedicated in 1917. Each panel has a separate dedication. We start by focusing on the bottom two panels, which depict St Michael fighting the Dragon (Satan) over the city of London (right, click the image to expand it). One can see St Paul’s Cathedral, the Tower of London, the River Thames and even some Bedford Park houses. One of the panels is dedicated by M.E Barrow in memory of her parents and the other in memory of ‘the Unfriended.’

The Ince Window is adjacent to the chapel, in the south aisle. It was designed and erected by William Aikman in about 1937, in memory of Harry Osborne Ince and his wife Annie.

The East (side) Window, like the East Window, was made by the noted jewellery designer John H. Bonnor, who was also famous for his stained glass. It is in memory of James Cook, of 24 Addison Road, who died on the 17 May 1907, and was given by his daughter Margaret.

The South (side) Window was given in 1911.  The upper part is in memory of W. N Hartley, who died on the 25th May that year, and of Sunday School Teachers and Scholars. It was designed by Lavers and Westlake, leading producers of Gothic Revival stained-glass in the 19th century. It features the ‘Three Marys’ at the empty tomb being addressed by an angel. Another window showing this group, in the south aisle near the Chapel, was given by Fr Alfred Wilson (the first Vicar) in memory of his sister, Sister Maria of the Community of St Peter in Kilburn. It was moved to this position when the All Souls Chapel was built in 1909.

Watch here for further Lent Reflections, day by day.
Back to Lent at St Michael & All Angels

5. The Hidden Window and the West Window

In 1925 a Lady Chapel was created at St Michael’s when the organ was raised to loft level in the church. This window was erected the following year, on the east wall, with a design of the Blessed Virgin Mary. It has, above her, a heart pierced by a sword, a reference to the words of Simeon in one of our readings today. Mary is represented with the Holy Family in a rustic setting, within a walled garden including a hay-filled manger and some rabbits playing around them. The motto ‘Sapiens qui vigilat’ – ‘wise are those who watch’ -is inscripted below. The window is now no longer on view because of the return of the new organ to the ground floor space.

… is of plain glass and was always intended to be. From the sanctuary and chancel areas it affords wonderful views of the changing seasons and it fills the church with light. In fact, the church is renowned for the shafts of light from the clerestory window that come into play at various times during the day. It can be quite spectacular during Mass when the light and the incense intermingle, and the silver of the altar vessels gleam as they are raised at the consecration. Yet Holy Saturday is not a day of light or of presence but of darkness and absence. The view through the West window is of winter, the tree bare and lifeless against the setting sun.