Catch up with our assistant priest Fr Thomas Couper speaking about his life and faith in a Zoom conversation with Torin Douglas, in aid of the Lent Charities Appeal. Around 60 people watched the free event on Sunday March 21st (below right). Thanks to those who have made donations to our three charities – The Upper Room, WaterHarvest and West London Welcome. You can still do so via the Lent jar in church or here via our VirginMoneyGiving page. 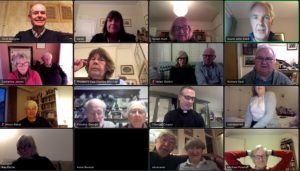 Fr Thomas was born in New Zealand but grew up in Australia.  After university he spent five years teaching in Australia, where he also played rugby sevens for the national team. He moved to London in 2009, is married to Gabi and they have three small boys. He was ordained at St Paul’s Cathedral on June 29th 2019  and conducted his first Mass at St Michael & All Angels on September 21st 2020 (click to see photos).

Though he played for Australia, he and his family still support New Zealand and the All Blacks! Find out why in the 40-minute conversation, in which he discusses lots more, including how he found his faith in Australia; how his church rugby league team gave out ‘sports star’ Bibles; why he came to London; how he met Gabi; why he chose to be ordained; how he came to St Michael & All Angels; what would be his dream parish – as well as some personal news.

Watch the video below – and donate to our charities here

At the age of five, Fr Thomas moved with his family to Australia. He has five older brothers, a twin sister and a younger sister – so it was a big move for his parents to uproot them from New Zealand. Fr Thomas takes up the story…

Copy this Passcode link first – you will be asked to put in:  5G%Q4=vT (note: leave no gaps).
Then click this link to watch:
https://us02web.zoom.us/rec/share/TQMXsDRwJAwrXzWltTHtY39cWp6xK6hDupKUOTzvV7n8pPmzoJdORrQbXPKJRYUN.MTmbwdmv3eOPSyCB Passcode: 5G%Q4=vTOPSyCB