2020 marks the 75th anniversary of the end of the Second World War. In St Michael & All Angels Church, Pat Davies and Jean Argles – the ‘Codebreaking Sisters’ – spoke about their wartime experiences in one of three Chiswick Book Festival sessions marking the event. 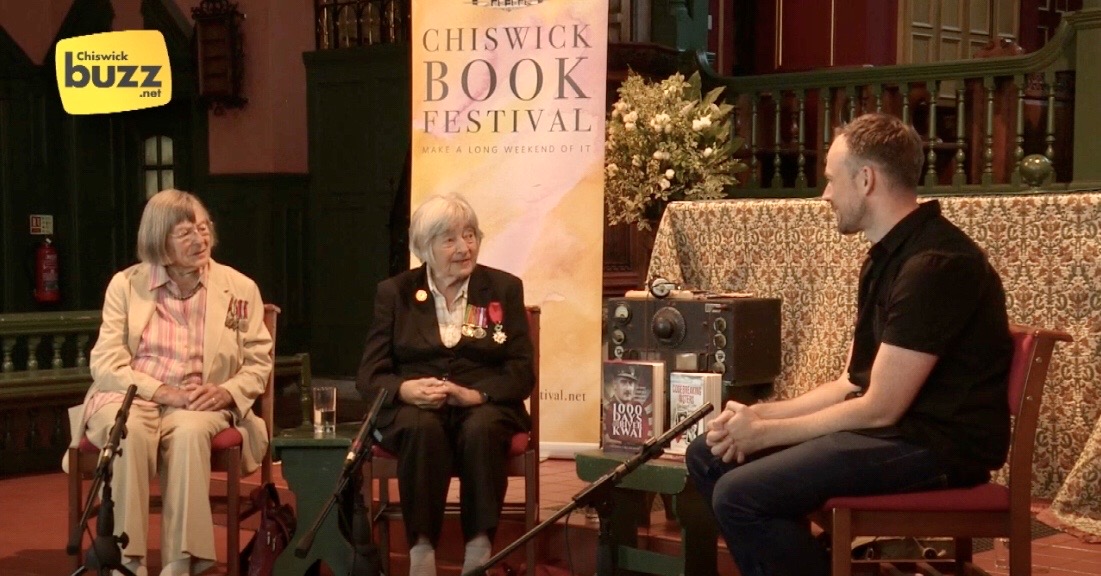 You can watch the sessions on YouTube, and read about the books that inspired them, here:
– Christopher Joll: Spoils of War: The Treasures, Trophies, & Trivia of the British Empire –  YouTube
– Patricia and Jean Owtram: Codebreaking Sisters: Our Secret War – YouTube
– Sir Nicholas Young: Escaping with His Life: From Dunkirk to D-Day and Beyond – YouTube 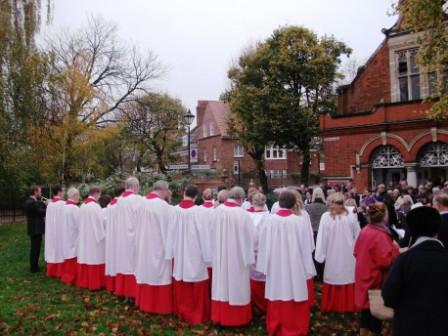 2020 is the 75th anniversary of the end of the Second World War in September 1945 – a war that brought conflict much closer to home and in which the streets of Bedford Park were not unscathed.

What do we know of St Michael’s during the war years and how did it fare during the bombing of London?

Unlike the First World War, we have almost no archive material covering this period. Copies of the church magazine end in 1938 and the local newspapers contain very few references to St Michael’s although other churches in the area seem to have been quite active.

We do know that Revd Lewis Smith was the vicar – he had been appointed in 1934 following the retirement of the longest serving incumbent, Revd Cartmel Robinson and remained in post until his death in 1953. He had been in the army in the First World War and had been awarded the Military Cross for gallantry in France. 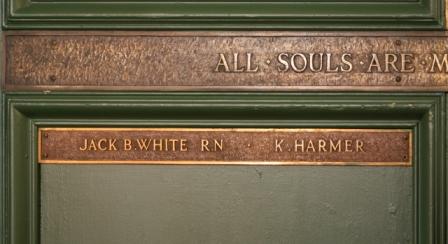 Names on the WW2 church war memorial
We have no information about the congregation during the Second World War and in contrast to the War Memorial in the church for the 1914-18 conflict, only 2 names are listed for 1939-45, Jack B. White R.N. and K. Harmer (right).

Jack Benjamin White was a Signalman in the Royal Navy and was reported ‘missing presumed killed’ on 26th January 1944 aged 26. Naval records indicate that he served on an LST (Landing Ship Tank) that was lost whilst attempting a landing off the coast of Anzio in Italy – blown up by a German mine as she stood off Anzio Port waiting to dock in heavy seas and freezing conditions. Jack was the son of William Stanley and Lilian Sarah White of Chiswick and is commemorated on the Portsmouth Naval Memorial. His name also appears on the Chiswick Roll of Honour, a record of which is held in the Chiswick Library.

K. Harmer has proved more difficult to identify. There are the only two K. Harmers recorded by the Commonwealth War Graves Commission (CWGC) database and neither is reported as having family in Chiswick. Attempts to find out more had persistently drawn a blank until our church assistant archivist, David Beresford, discovered some rudimentary church magazines from the war years in which was the following entry from August 1944:

“ Please pray for the soul of Mabel Harriet Harmer, who died from injuries received during a recent incident in the parish. Quiet and extremely shy, handicapped by almost total deafness, Mabel Harmer was not known to many of the congregation, but she was a most devout lover of our Lord. She had received Holy Communion in her home on the morning of day the bomb fell upon it. May she and the others who were killed at the same time, rest in peace”

Further research has revealed that Mabel Harmer was aged 58, was a dress maker and lived at 61 Thornton Avenue. She was injured when a bomb fell on it on 30 June 1944 and died the next day in the West Middlesex Hospital from the injuries she received. History does not relate whether the bomb that killed Mabel Harmer was a V1 (like the one that destroyed Chiswick Polytechnic two months later, see below) but the area of damage it caused must have been considerable, judging by the size of area now occupied by the flats where 61 Thornton Avenue previously stood. Mabel Harmer has an entry on the CWGC website and is on the list of the civilian war dead.

So is Mabel Harmer the ‘K. Harmer ‘ whose name appears on our war memorial? It seems likely that she is, given her association with St Michael’s and her residence in the parish so close to the church. We don’t know when the WW2 war memorial plaque was added to the names from WW1 and it’s possible that, by the time it was, those adding the names recorded her initial incorrectly, given that Mabel was a single lady “quiet and extremely shy” and not well known to the congregation.

Reports of bomb damage were not reported in the press to prevent such information being picked up by the enemy and in order to preserve morale. If anyone has further information about this incident we’d be delighted if they could they get in touch via the Parish Office.

The church itself did not escape the war undamaged.
Various minor devices, such as incendiary bombs, had exploded in the Bath Road in the early years but in the summer of 1944 came the  much more menacing pilotless V1s , the ‘doodlebug’ or flying bombs. 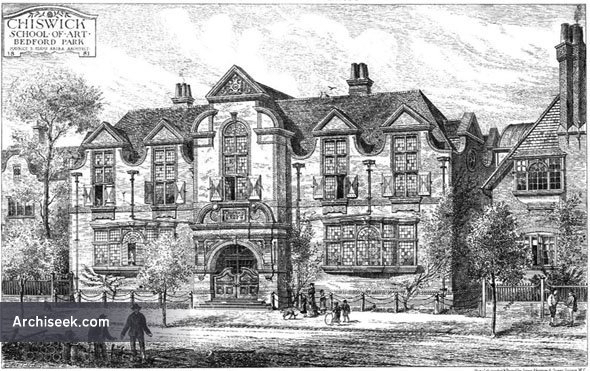 On August 23rd 1944, at 8.32 in the morning, a V1 landed on Chiswick Polytechnic in Bath Road (built in 1881 as the Chiswick School of Art (right) on what is now the site of the Arts Educational Schools building.) Part of the building was destroyed along with severe damage to houses in Flanders Road and Roman Road: See BBC WW2 People’s War: contribution from Gordon Howard of Roman Road.  Perhaps because of the time of day and the month there were fortunately few people in the vicinity  – the Chiswick Bomb register records just one fatality, 6 people taken to hospital and a further 22 with minor injuries. 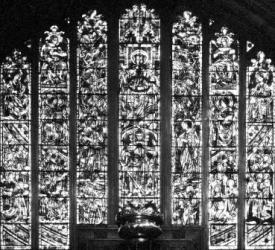 The blast severely damaged a number of buildings in the surrounding area, including St Michael’s. A number of its windows were blown out (East Window 1930 left), the roof was damaged and irreparable harm was caused to the stained glass at the east end.

According to the Bomb register a Women’s Voluntary service (W.V.S.) Incident Inquiry Point was opened at ‘the Vicarage in Priory Road’ but closed that same evening.

No reports of this incident appear in the Chiswick and Brentford Times of that week. As the very helpful local history expert at Chiswick Library explained, bombings and casualties were not reported in the press in order both to preserve morale and to prevent such information being picked up by the enemy. 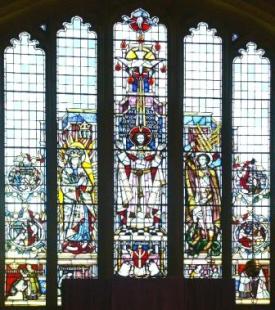 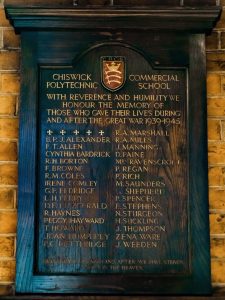 Left: In the side chapel of St Michael & All Angels, there is a memorial to 31 people from Chiswick Polytechnic who died in World War 2 . It is recorded on the Imperial War Museums Register here.

Right: The stained glass in the church’s main East Window was replaced in 1952 to a design by the artist, Lawrence Lee, who had trained with Martin Travers, examples of whose work can also be seen in St Michael’s.

Not all the bomb damaged stained glass was replaced, as can be seen today by the clear panes in some of the windows on the south side. In one of these is a fragment of stained glass showing the head of an angel, rescued from a shattered panel.

There must be many tales of St Michael’s during the war years and maybe someone reading this will know more about the two servicemen commemorated on our War Memorial. If you have any information or reminiscences you can pass on please contact me via the Parish Office (parishoffice@smaaa.org.uk). I’d love to capture your memories about what is a rather silent part of St Michael’s history.

The 1939–45 Middlesex County Council Bomb Damage Map is featured on the Chiswick Timeline mural under the bridges at Turnham Green tube station and here online, with descriptions of the bomb damage; plus a ChiswickBuzz video interview with Dr Karen Liebreich; and illustrations by Anthea Craigmyle from her book A Vicarage in The Blitz (below), based on letters from her mother Molly Rich, the wife of the vicar of St Nicholas’ church on Chiswick Mall by the river. 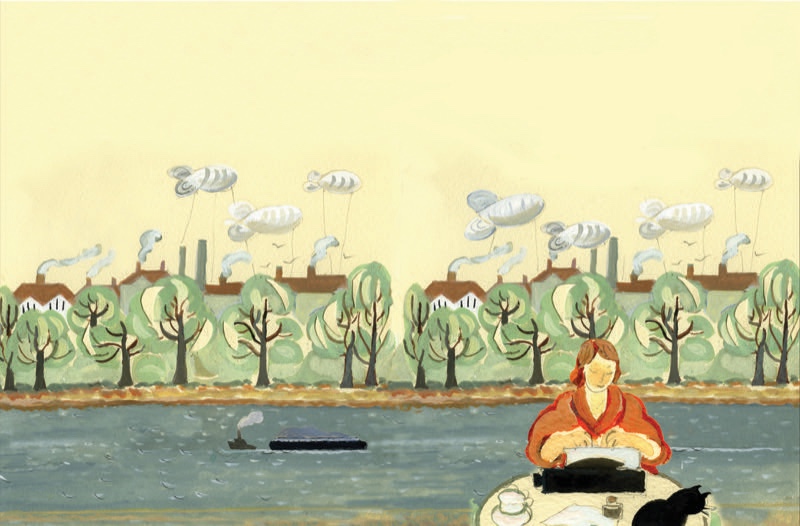 The V2 and A Vicarage in the Blitz were featured in an exhibition, ‘Chiswick, the Blitz and the V2’, created for the 2015 Chiswick Book Festival by Val Bott and James Wisdom of the Brentford & Chiswick Local History Society. It also included documents and images from the Local Studies section at Chiswick Library (below). In 2019 – the 80th anniversary of the start of WW2 and the 75th anniversary of the V1 which blew out the windows at St Michael’s and of the V2 landing in Staveley Road – we displayed the exhibition again in St Michael & All Angels Church as part of our Remembrance commemorations.