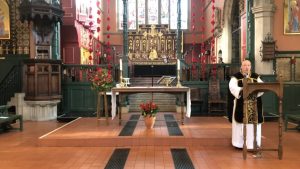 This has been a year of commemorations.  The Cenotaph at Whitehall is 100 years old this year. The war memorials of 20th Century England were erected not so much to celebrate the triumphs of war but to mourn the dead. This is why on Remembrance Sunday we hold a Requiem. We remember before God those who died in the two Great Wars of the last century and all conflicts since: ordinary men and women who were known and loved and grieved over, who gave their lives for freedom, justice and peace and who sought to bright light to a darkened world.  We will remember them.

“Our lamps are going out!”

In our Gospel today, (Matthew 20:1-16) Jesus tells the Parable of the Ten Bridesmaids, who represent the expectant Christian community as they await the return of Christ (the Bridegroom) and the day of Judgement. Some of the bridesmaids are foolish and some are wise, and we hear the cry: ‘Our lamps are going out.’ On this Day of Remembrance, it is hard for me not to be reminded of the  poignant remark of the Foreign Secretary, Sir Edward Grey, on the outbreak of the First World War: “The lamps are going out all over Europe, we shall not see them lit again in our life-time.”

This year we have commemorated the 75th anniversary of VE Day and VJ Day. Eight years ago, Anthony Beevor came to talk at the Chiswick Book Festival about his excellent history of the Second World War. The book begins with the Japanese invasion of Manchuria in 1931 and ends with the Soviet invasion of China. He makes the point that while the war in Europe appeared completely divorced from the war in the Pacific and China, these events on the opposite side of the world had profound effects on each other. This was truly a ‘world’ war in which, throughout the globe, the sufferings of soldiers and civilians is almost unimaginable. It is our duty to keep alive these events in the collective memory, this milestone which changed the course of world history.

75 years ago, the streets of London were full of people celebrating VE Day, Victory in Europe Day, which, towards the end of the World War 2, marked the end of the fighting with Nazi Germany in Europe.

In January 1945 the Allied Forces had turned back the German army at the Battle of the Bulge; in February, Roosevelt, Stalin and Churchill met at Yalta to decide Europe’s future; and just days later Allied Forces firebombed Dresden, killing at least 35,000 people. In April Hitler had committed suicide and, the following month, Germany formally surrendered as we began to learn of the horrors that were perpetuated at Auschwitz and other death camps.

The War in the Pacific continued. In February 1945 US troops landed at Iwo Jima and endured a month of brutal fighting. In April they invaded Okinawa and began to push the Japanese army back. On August 6th the Enola Gray dropped ‘Little Boy’ on Hiroshima killing 70,000 people. Three days later ‘Fat Man’ was dropped on Nagasaki killing at least another 40, 000 Japanese. On August 14 Japan Surrendered, VJ day, Victory in Japan. It had been six years and a day since World War 2 had begun. As 1945 closed and the carnage of the war was surveyed, it was estimated that between 70 to 85 million had died. In the June the United Nations was created in the hope of preventing another World War.

So this is a day to remember before God, as the poet Wilfred Owen put it, ‘the pity of war’: those brave men and women who laid down their lives for our freedom and fought against oppression and tyranny; and all who experienced appalling suffering, deprivation and loss – both military and civilian – throughout the world. We do this best by keeping silence as a mark respect for those who sacrificed themselves so that others could flourish and because words fail us in the face of such evil which caused enormous pain, misery and distress.

Sir Edward Grey’s remark “The lamps are going out all over Europe, we shall not see them lit again in our life-time,” remains as poignant as ever but also, in terms of the parable of Jesus which we heard today, very challenging.

Some of the bridesmaids who have gone to meet the Bridegroom have come unprepared. He has taken longer than they imagined and so they cry out: “Our lamps are going out!’

For me, in the parable today, “our lamps are going out” refers to a lack of forethought in providing the right resources which would be needed.

This bewildering year of pandemic has made many of us realise just what and who are really important to us as individuals and as a society; on who, and what, we are dependent, and which we can easily take for granted.

And we hear the words in the parable addressed to us:

One of the essential resources for our life is our Christian faith, our belief in Jesus Christ. I have heard from so many of you during our time of lockdown, how important your faith has been to you – sustaining, strengthening, comforting and enabling. I’d like to take that thought one step further, though.

About a year ago, the author Tom Holland, wrote a book called Dominion: How the Christian Revolution Remade the World. He wanted to think about the nature of Christianity and how it influenced the development of culture and politics of western civilisation. He shows how our basic view of the human person, our devotion to compassion and mercy, our commitment to the moral equality of all persons, our deeply rooted conviction in the intrinsic worth of the human person, our sense of right and wrong, our belief in transcendent truth, our commitment to education and the liberal arts and so much else are the fruit borne from the roots of Christian faith.

And he goes on to say something that startled me.

He says that what distinguishes the Christian idea of love from the romantic, erotic, touchy-feely sense it has acquired in modern times is that it has nothing to do with feeling. Love for the New Testament is a social practice, not a sentiment. How you feel about the person whose place you take in the queue for the gas chambers is neither here nor there. You don’t even have to know him. Only a love of this ruthlessly impersonal kind, which couldn’t care less about the gender, rank, skin colour or personality of whoever needs your help, could prove equal to what St John darkly calls the powers of this world.

As I have said, this has been a significant year for commemorations, not just the anniversaries of VE Day and VJ Day.  Some of these speak to our situation now, they point us to other ways in which we trim the lamp.

During the period of lockdown, when we have been moved inward, to the vast inner space of our thoughts and imaginations- a place often ignored by many people- and many have discovered, or re-discovered, how essential the arts are in our daily life. Reading, poetry, paintings, films, photography, dance, music, all have a substantial effect on our inner life and mental and emotional well- being. They help us to connect with what is bigger than ourselves. They speak to and feed our soul.

It is the 200th anniversary of the birth of Florence Nightingale, and this year has been declared by the World Health Organisation as the International Year of the Nurse and Midwife. We have seen the self-sacrifice of so many who work in the Health service in recent times, often putting themselves at risk in order that others may have life. Here are wonderful examples of the practical love and care of others, of people who dedicated their lives, their resources, to serving others, especially at times of direst need.

It is the 300th anniversary of the birth of Gilbert White. Who? A parson naturalist and curate of Selborne in Hampshire. He is regarded as the first ecologist. White observed and recorded nature and his works had a great influence on Charles Darwin. He helped shape our curiosity about nature, our respect for creation, and that human beings are part of the natural scheme of things. Our care for ourselves and others goes hand in hand with a loving respect and care for our environment, for the creation of which we are all a part.

“… but the wise took oil in their vessels with their lamps.”

Like some of the bridesmaids, we begin to get frightened, our resources are running low, coming to an end, our lamps are going out. But the parable of Jesus teaches the expectant Christian community of the need of the precious resources of faith, hope and love under God, where even the most unpromising ground can yield fruit. In bleak and discouraging situations it is practical expressions of trust, hope and love that become the very stuff of faith, a defiant faith, of the coming of God amongst us, and which is ready to receive Him with lamps well trimmed.

What resources does it take for us to live properly human lives under God, so that when we appear before the judgement seat, we may be known as peacemakers of our Heavenly Father?

As we contemplate deeply our Christian Faith, the gifts of creativity, practical loving care of others and of creation and the sacrificial giving of others so that we may live, may we be inspired in faith, hope and love this day and always.