Theme:
Jesus has risen. Believe it or not! 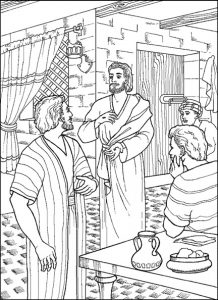 Scripture:
Now Thomas (called Didymus), one of the Twelve, was not with the disciples when Jesus came. So the other disciples told him, “We have seen the Lord!” But he said to them, “Unless I see the nail marks in his hands and put my finger where the nails were, and put my hand into his side, I will not believe it.” John 20:24-25

There is an interesting book called “Believe It or Not.” It was written by Robert Ripley. Mr. Ripley enjoyed collecting strange and amazing bits of information that were unbelievable, but true. Let me share some examples from his book.

According to Mr. Ripley, a boy went to the doctor because he had a pain in his foot. The doctor discovered that the boy had a tooth growing in the bottom of his foot. Can you believe that? I think I would have to see it to believe it!

You may be surprised to know that a man by the name of James Cook once had a chicken that laid a perfectly square egg. Now, I have seen white eggs, brown eggs, even spotted eggs, but I have never seen a square egg. I think I’d have to see it to believe it!

This book is filled with a lot of things that I think I would have to see to believe, but if they are true, they are true, whether I believe it or not!

On the Sunday that Jesus rose from the grave, he appeared to a group of his disciples. One of the disciples, whose name was Thomas, was not with them. When the disciples told Thomas that they had seen Jesus and that he was alive, Thomas said, “I won’t believe it until I see it with my own eyes.” He said he wanted to see the nail-prints in Jesus’ hands — and the place where the spear was thrust into his side.

A week later, Thomas saw Jesus. Jesus invited Thomas to touch his hands where the nails had been. He told Thomas to put his hand in the wound in his side. Then Thomas believed! Jesus said to him, “Because you have seen me, you have believed. Blessed are those who have not seen and yet have believed.”

A lot of people today won’t believe that Jesus really rose from the grave because they haven’t seen him with their own eyes. Do you know what? It is true whether they believe it or not! You and I have never seen Jesus, we have to accept him by faith. The question is, will you believe it — or not?

Prayer
Dear Jesus, help us to accept by faith that you have risen from the grave and that you are alive.
Help us to believe, because it is true, whether we believe it or not. Amen. 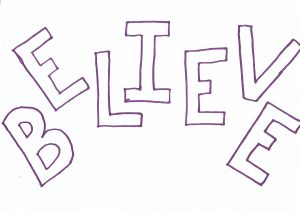 See it and BELIEVE it! 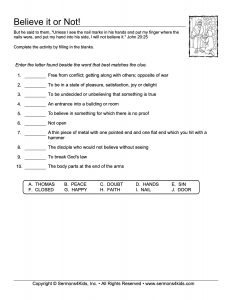