The Master of Ceremonies, Cathie James, explains what you see in the sanctuary (and beyond). 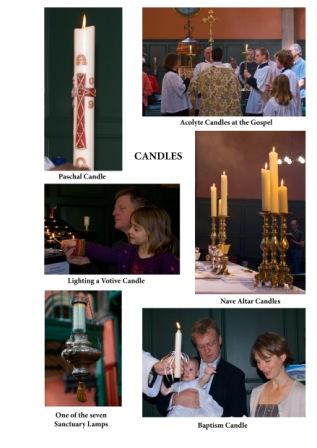 Candles are a great feature of our worshipping life at St Michael’s – not only during the Mass, but also at Benediction, at Easter, in processions, at baptisms and funerals, and the votive candles lit by those who come into the church to pray during the week.

During the month of February we celebrate the Feast of Candlemass (February 2nd but transferred to the nearest Sunday) when candles are blessed and carried in procession into the church. On this day we commemorate the presentation of Christ in the Temple at Jerusalem and the proclamation by the aged Simeon that Christ is a ‘light to all nations’’. Our Candlemass procession reminds us that Christ is our light and that the light of faith is kindled when we enter God’s house to worship him.

Candles feature prominently in our worship, not only at Candlemass but throughout the Christian year. They symbolise the light of God in Christ, perhaps most familiarly encountered in the Biblical texts from St John’s Gospel  – ‘the light shines in the darkness’ (John 1:5) and ‘’I am the Light of the World’ (John 8:12).

Candles in the Mass

At least two Candles burn on the altar at every Mass. At our High Mass on Sunday morning you will notice candles lit on the nave altar and also the six tall candles at the High Altar (affectionately known by the servers as ‘the big six’).

On a major feast day or festival the number of nave altar candles increases to four or six, depending on its liturgical significance. By contrast, in the penitential seasons of Advent and Lent, there are just two altar candles in plain candlesticks.

If you are in church early enough on a Sunday you might notice a server lighting the ‘big six’ – he or she will start by lighting the candle on the right nearest the centre. This symbolizes Christ sitting at God’s right hand. This is the last candle to be extinguished after the service.

During a High Mass you will also see servers processing with lighted candles – these servers are known as acolytes. Their candles illuminate and flank the processional cross, light the Gospel as it is read amongst the people and are raised at the elevation of the consecrated bread and wine during the Eucharistic prayer. They signify that Christ is present as we gather for worship and in the reading of his Word and in the Sacrament.

During the Advent season five candles within a circle of evergreen are displayed on the nave platform symbolising aspects of the imminent coming of Christ – three purple, one pink and one white. They are lit sequentially on the four Sundays of Advent, with the white candle, representing Christ, being lit on Christmas Day

Candles and the Blessed Sacrament

At St Michael’s the Blessed Sacrament is reserved in the Tabernacle, veiled in white, on the High Altar. To mark its presence, a light is kept burning near the Sacrament that is never extinguished.

There are seven lights lit in the sanctuary altogether, seven being a sacred number in the Bible expressing completeness through the union of earth with Heaven. The sacrament of Jesus Christ is the means of our union (com-union) with God. Six lights surround the Tabernacle, near the saints on the reredos, and there is one other.

Have you noticed this light in the silver holder on a chain that hangs over the centre of the sanctuary?

You will see the dedication for these lamps each week in the pew sheet. They may have been subscribed by an individual in celebration, or memory of a loved one, or to mark some special event.

During the service of Benediction when the Blessed Sacrament is exposed and venerated we light additional candles in candelabra on the altar to honour the presence of Christ in our midst.

This candle is renewed each year and is the focus of the service of light during the Easter Vigil. Those of you who have attended this service will recall the new Paschal candle, a symbol of the Risen Christ in the world, being processed outside in darkness by one of the clergy . The sacred minister traces a cross on the candle, the Greek letters alpha and omega and the year – Christ is the beginning and the end, the Lord of all time and our time. Five incense grains are inserted as a symbol of the five wounds of Christ. The candle is then lit with fire from a brazier and processed into the church with light for the congregation’s candles being passed back from it.

The Paschal candle is then placed in a stand on the nave platform and remains there for the 50 days of Eastertide until the Feast of Pentecost, after which it is placed at the back of the church near the font.

It is lit for all baptisms and funerals (when it is placed on the nave platform near the coffin). From it, at every baptism, is lit the candle given as a sign that ‘You have received the light of Christ: walk in his way all the days of your life’

Candles also symbolise an offering of prayer to God  – in St Michael’s we have areas before the statues of Our Lady and St Michael where prayers can be offered and candles lit at any time when the church is open. There are also two candle stands to either side of the altar in the All Souls Chapel where candles can be lit for private prayer.

In addition, there are six tall wooden candlesticks that are used to surround the coffin at funeral services and also as processional candles during certain penitential services during Easter and Advent. They also serve as shrine candles at the statues of Our Lady and St Michael and are lit for major feasts and festivals.

Responsibility for ensuring that candles are always available and are maintained and cared for is a very considerable undertaking at St Michael’s. The sanctuary lights require changing every 7 to 8 days, the oil filled ‘big six’ need filling every 3 services, candles need to be checked, trimmed, replaced and replenished, and the candlesticks dewaxed, cleaned and polished on a weekly basis. These tasks fall in the main to the Sacristan, Anne Mower, to the Master of Ceremonies, to the brass cleaners, to our caretaker, Ken, our Parish Administrators,  and most importantly to our ‘candle supremo’ David Beresford who is tireless in caring for all our candles and an expert in lighting them.

My grateful thanks to Father Kevin for his input on theological symbolism.