David Beresford writes: At the three-year stage of the Great War Centenary, Remembrancetide at St Michael’s is marked by another exhibition in the church featuring a selection of the 37 of the Parish who fell in the War in 1917. This number is almost as many as the 40 we remembered in the previous years from August 1914. As the conflict continued, the rate of attrition rose inexorably, requiring constant replenishment of manpower after February 1916, by conscription – the compulsory national service demanded of those over the age of 18. 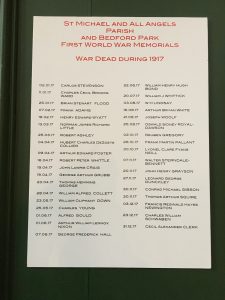 For this reason, there is not space to detail all our Dead in the 1917 exhibition, as in previous years.

The Passing of the other 27 in the service of their country will not, however, go unmarked. Scroll down for details of our new World War 1 Project website.

The nine story boards give details of ten of them, among whom are:

– our own “Trench” Poet, playwright and man-about-town, Captain William Oliphant Down, MC;

– the two members of a family of Chiswick greengrocers, Privates William Whittick and Reuben Gregory, cousins, who both died in the long drawn out 3rd Battle of Ypres in July and October respectively;

– and Private Leonard Dunckley, for so long a server and thurifer at St Michael’s, and one of the church’s unofficial war correspondents, who died in the ultimately successful Palestine campaign, also in November, just before the allies’ occupation of Jerusalem.

Below is the panel devoted to a member of the Royal Flying Corps, Lieutenant Arthur William Lennox Nixon, who died at Vimy Ridge, a month after he was married at St Michael & All Angels. 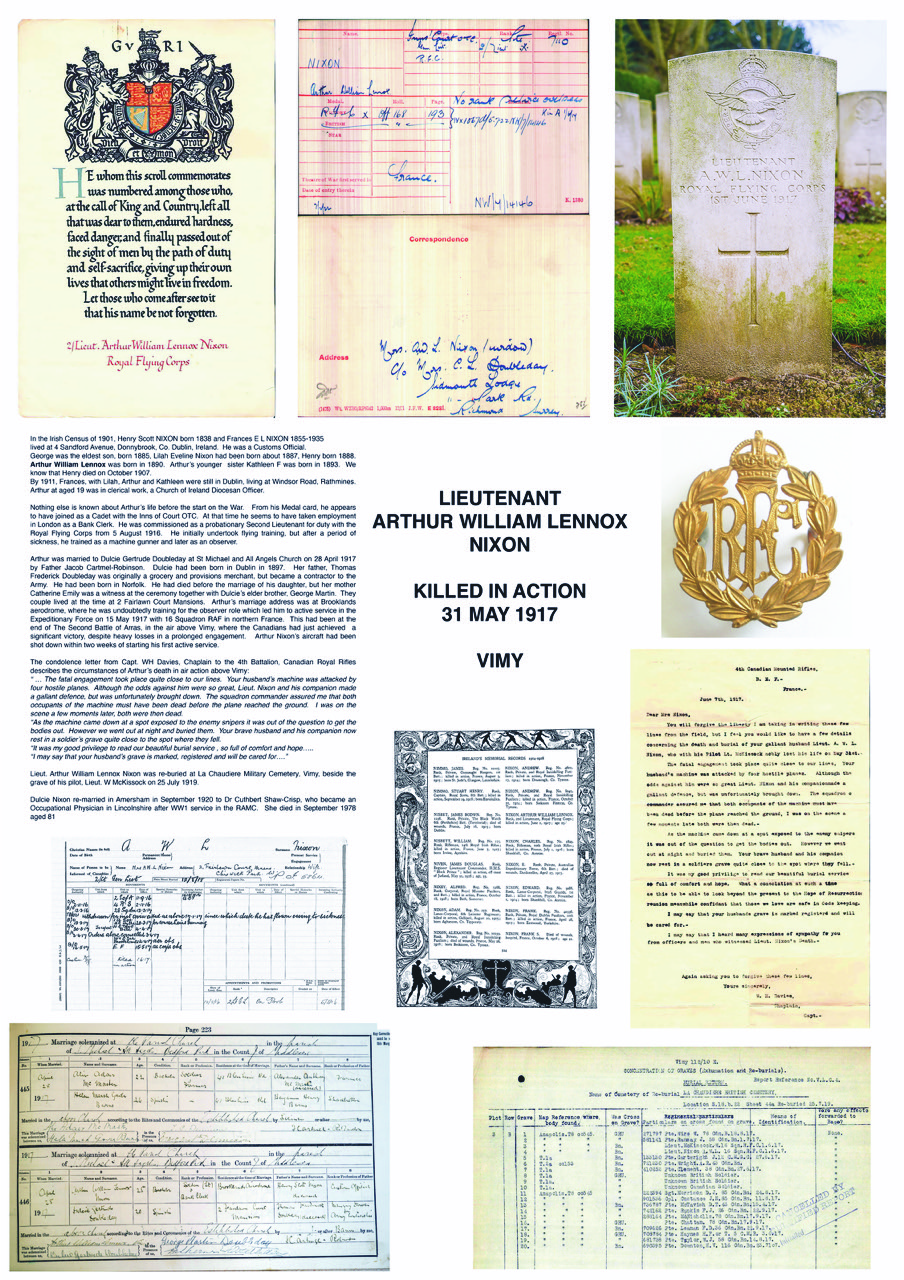 The Passing of the other 27 in the service of their country will not, however, go unmarked.

This month marks the formal launch of our World War 1 Project website, dedicated to the memory of all those named on the various First War memorials within the parish. These include not only the Bedford Park Memorial Seat outside the parish hall (pictured above) and the Parish Memorial – the imposing Rood figures of Christ the King with Our Lady and St John with their accompanying bronze plaque – but also the Cadet Memorial in the South Aisle, and the several individual memorials subscribed by family members. We are very grateful to the Heritage Lottery Fund for providing a grant to make all this possible.

We hope that the website will not only serve as the church’s record of arguably the most epoch-breaking conflict of the last century, but will also shed additional light on existing local history, and will serve as a powerful resource for local schools in their historical and local studies. It will eventually contain biographical detail relating to all those names that we are able positively to identify, together with details of local responses to the War and its aftermath and will also contain new information about the social conditions of our locality both before and during the war period. At this launch, the data remains incomplete, but is constantly expanding.

Over sixty of our Fallen are now fully documented, and illustrated by pictures and other source documents.

Fr Edward Barlow adds:
As David has mentioned, this project will also provide a valuable educational resource which we can offer to local schools. Our schools liaison officer Tassy Russell has been working closely with David throughout the project and has devised an excellent range of lesson plans, activities and programmes for visits which focus on our war memorials, local history, the personal stories of the war dead and the research skills David has used. The resource will be available through the website and has already attracted interest from local schools.