St Michael’s Christmas Crib (detail above) is created in the High Altar at the Service of Nine Lessons and Carols when the carved figures are brought to the altar. See pictures of the 2018 Nine Lessons & Carols service here and Mary and Joseph (below left). 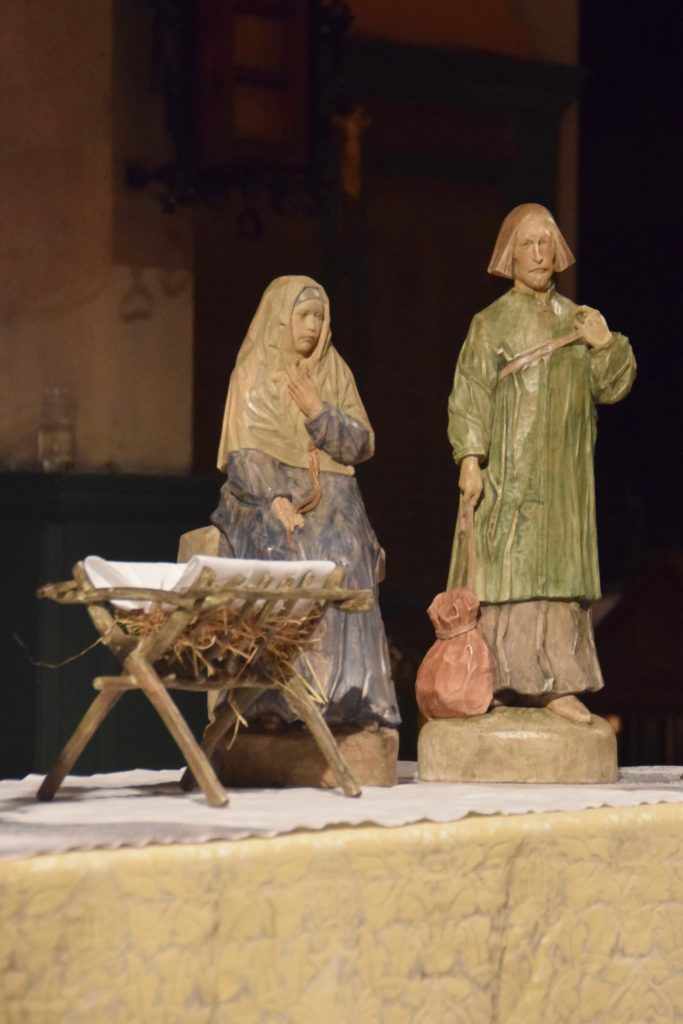 It is then displayed from Christmas Eve until after the Three Kings arrive on Epiphany Sunday in January. Everyone is welcome to visit it before and after services. Children, in particular, love the large beautifully carved wooden figures and the excitement of “following the stars” through the church to find where the baby Jesus was born.

The Crib was created by Oliver West in 2005, the year he stepped down as the church architect and organist at St Michael’s. The backdrop was painted by his artist daughter, Mary West.

The hand-carved figures were commissioned from Jim Staines in 1999. There are now 12 figures, which are placed in the stable at the relevant times during the Christmas season:-

All are carved out of cedar wood, except the figure of the baby which is carved from lime. Before carving, the wood has to be planed and glued to create a suitable medium for carving. The legs and ears of the animals are carved separately and attached with glue and dowels. Afterwards, the figures are sanded, with paper and wire wool, before colouring with a combination of stain, powder colour and wax. Each branch of the crib has been hand-carved and pinned into place.

Jim Staines, now over 80, has been carving in wood and stone since he was 16 and sold his first piece – as statue of St Francis of Assisi – when he was 20. He trained at the Royal College of Art. His wife Pam, a sculptor, coloured the crib figures. You can read more about them, and see more of their work, here.

Advent and Christmas at St Michael’s