Right: The gravestone of Leonard Dunckley, a server at St Michael & All Angels who died in Palestine in November 1917. 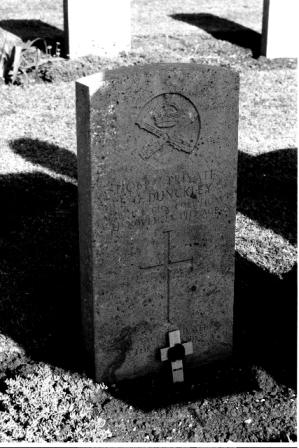 August 2014 saw the 100th anniversary of the start of the Great War. The following extracts from the Church magazine of the period provide a poignant snapshot of how the life of St Michael’s and its parishioners was affected by that war.

The incumbent throughout the war was the Reverend Jacob Cartmel Robinson who wrote most of the copy for the magazine. We do not have the magazine covering the outbreak of war in 1914 but in early 1915 the mood was upbeat and in February the vicar writes:

All this knitting which goes on everlastingly, what a sight it is! In the home, in the theatre, in the train, in the lift – there it is! You cannot get away from it …..”Tommy” at the front must feel a bit pleased, I fancy, when he thinks of all those women and girls mothering him.

June 1915 – a word should be said for our choir … nearly all the adults are serving their country, either as soldiers, constables or on relief committees …and yet the music is very good, is it not? Bravo choir!

July 1915 – among the wounded at the front, I see, are Oliver Thornhill, the son of our esteemed sidesman, now doing duty as a special constable, and Harry Lindsey, a Server. Both are doing well, I believe. Bedford Park is having its due share of killed and wounded, but we are proud of our fighting men. God bless them!

There are to be no Parish Treats this year in London. Well a day! What will the mothers and the children think? They will not like it, perhaps,  but it is good for them, as for all of us, to know that great things are happening, involving the sacrifice of England’s best manhood, and that it is not well with a nation that can take its pleasure or do its business ‘as usual’ just now.

As the war progresses the mood darkens. The vicar and the family of his predecessor, Revd Alfred Wilson, were not immune from bad news from the front. In September 1915 young Cartmel Robinson is reported wounded in the Dardenelles – his wound was severe but he recovered. In the same edition we learn of the death in the field hospital at Armentieres of Second Lieutenant Lawrence Wilson:

Mrs Wilson and the family (Revd Wilson had died in 1909) have our sincerest sympathy. They have paid a heavy toll in the defence of their country this being the second son killed in battle (their son, Harold had been killed in 1900 at the battle of Spion Kop in the Boer War – the clock on the West wall of St Michael’s commemorates him). It is presumptuous to offer comfort under such circumstances, and yet it is something for them to know that he was very highly esteemed by those who knew him in life, and that the Parish where he lived as a boy now honours him in death.

The Wilsons were to pay an even higher price. In May 1918 the vicar reports that:

Mrs Wilson…has lost another son in the war – Edgar, the doctor – who was mortally wounded while attending a soldier on the field of battle. This makes the third boy who has given his life in the service of his country, while a fourth is in the fighting on the front. All this makes a heavy burden to which may be added the loss of her husband and partial blindness. Our united prayer is that God of his mercy may be kind to her and spare her further suffering.

Both Lawrence and Edgar Wilson are commemorated on brass plaques in the south aisle of the church.

Also in September 1915, the magazine reports that Mr Smart, the Sacristan, has signed up for military duties – the vicar writes:

I don’t know what we shall do without him … one feels proud of being associated in work with men like Smart, so robust, sensible, reverent and unfailing….as Smart is giving up his business at the call of his country and leaves behind a wife and children, we ought to show our appreciation of his good work. As he said to me “I am an old soldier, and I felt I ought to go when they asked for men”. They must value him at headquarters for he has already risen to be a Corporal. When they asked him what he was, he replied “Sacristan at St Michael’s, Bedford Park”. I wonder if the recruiting officer knew exactly the nature of such an occupation… .’

A testimonial was subscribed for the Smart family and the individual donors (together with their donations!) were listed in the following month’s magazine.

Quite by chance about 10 years ago, David Beresford encountered Mr Smart’s son who was paying a brief visit to the church which he remembered as a child. As a result of this fortuitous meeting David was sent a number of photographs including this one (left), showing Mr Smart, the Sacristan, in the vestments of a subdeacon. 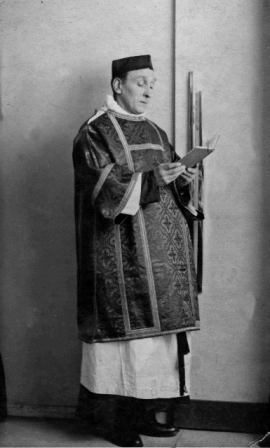 Corporal Smart wrote regularly from the front, as did many of the St Michael’s soldiers, but his letters are particularly evocative and moving. In May 1916 he wrote to his wife:

“This letter is written under gunfire. There is a battle on and its realities speak more than tongue or pencil could tell…….night and day continuous fighting and the spirit of the officers, non-coms and men, wonderful….I expect you and the children will be going to Mass tomorrow, Ascension Day. I shall think of you. Remember me in your prayers. I miss the Altar prayers with the Vicar…..give him my kind regards, and tell him I miss my church work around the altar very keenly. I must stop; the guns distract me; they are booming away louder than ever”

In February 1918 there is an article in the magazine from Mr Smart entitled “Intercession Services at the Front Line”. This describes a short service in a hole dug in the side of a winding road over the hill.

Prayers finished, (which included those for two of the company’s ‘beloved comrades’ whom they had ‘laid to rest that very afternoon’) we sang, kneeling, ‘O God our help in ages past’. This was indeed a prayer, sung in earnestness and reverence. Many men in the days to come will call to mind the night in the hole in the road …..Here you see the way the evening hour was spent on the Western Front, right forward in the firing line, on the night of 6th January (Epiphany) when any moment might be our last on earth.

Mr Smart survived the war but many others did not – their names are inscribed on the War memorials both inside the church and on the memorial seat outside (for a full account of these war dead see John White’s article in The Clarion, November 2006).

To single out just a few of those whose deaths were reported almost monthly in the magazine:

July 1916 ..we have lost one of our best and dearest lads in the War – KennethHallward (his parents were very active church members; his father was the Choir Treasurer and his mother Treasurer of the High Altar Flower Fund). A wreath hangs over his vacant seat in the choir and will remain there until we put up the permanent memorial in the Church to him and his companions who have given their lives for their country in this war.

Following on the death of Father Stevens’ brother (Fr. Stevens was the St Michael’s curate) – the comely lad who reminded us of ‘David’ being ruddy and fair of countenance – comes the sad news from France of the death of Alexander Robinson, the only son of our Churchwarden. He was one of the most regular and devout Servers at the altar, and had a promising career in front of him, having done well at University and taken a good degree in Science though so young.

In October 1917 the magazine reports the presentation of a Bishop’s throne to the Church by Mr & Mrs Robinson in memory of their son.

It stands where Lieut. Robinson used so often to have his place among the Servers before he went out to the War ….it is a fitting memorial to a good son, a good soldier and a good Christian.

This chair is still up in the Sanctuary on the north side of the High Altar and when I polish its brass memorial plaque, as I do from time to time, I shall think of young Albert Alexander Robinson who died on the Somme aged only 21.

May 1917 – Everybody who knew Arthur Birket Foster was deeply grieved to hear of his death at the Front in France. He will be remembered by many as the Archangel Gabriel in the Bethlehem Tableaux, a character for which he was wonderfully fitted by the spiritual beauty of his countenance… (Second Lt. Foster was the son of the famous Victorian watercolorist Myles Birket Foster)

And lastly in January 1918 we learn that during the past month Dunkley, Bavin, Taylor and Tolson have all been reported killed. Tolson used to come out with us carolling. Taylor’s father often helped with his violin in the Masses….and Dunkley, dear Dunkley, most earnest of the Servers at the Altar and a famous swinger of the thurible – how we shall miss his cheery face. To think he is gone! A staunch churchman, and helpful in Services even on the field of battle, as we learned from a Chaplain. Goodbye Dunkley and God be with you!

Some of you may remember the presentation about Leonard Dunckley put together at St Michael’s by David Beresford and Geoff Callister in 1998, to mark the 80th anniversary of the Armistice. It included dramatised readings from Dunckley’s letters from the front. Dunckley died in Palestine in November 1917 – he is buried in the military cemetery in Jerusalem (see picture above), and whilst on a pilgrimage to the Holy Land with the Bishop of Kensington we visited his grave for a short service of remembrance.

A touching conclusion comes in August 1918 when the vicar is soliciting the donation of precious stones to decorate a memorial chalice in memory of “friends fallen in the War”. In what can only be a plea to that generation of women whose chances of a happily married future had died with their husbands and sweethearts, Revd Cartmel Robinson writes:

There must be a number of ladies who have gems in their possession of whose future disposal they are in doubt. They could not do better than give them, and so preserve them for sacred use, in the commemoration of those who have shed their blood in the great sacrifice.

The St Michael’s magazines 1915 -1918 are a chronicle of lost youth, of decimated families, of self sacrifice, of optimism in the face of appalling news, and of ‘getting on’ with parish life when the world around was in chaos – all made very personal. Reviewing them has brought to life those names that are commemorated in many places in St Michael’s – and meaning to the words “we will remember them”.