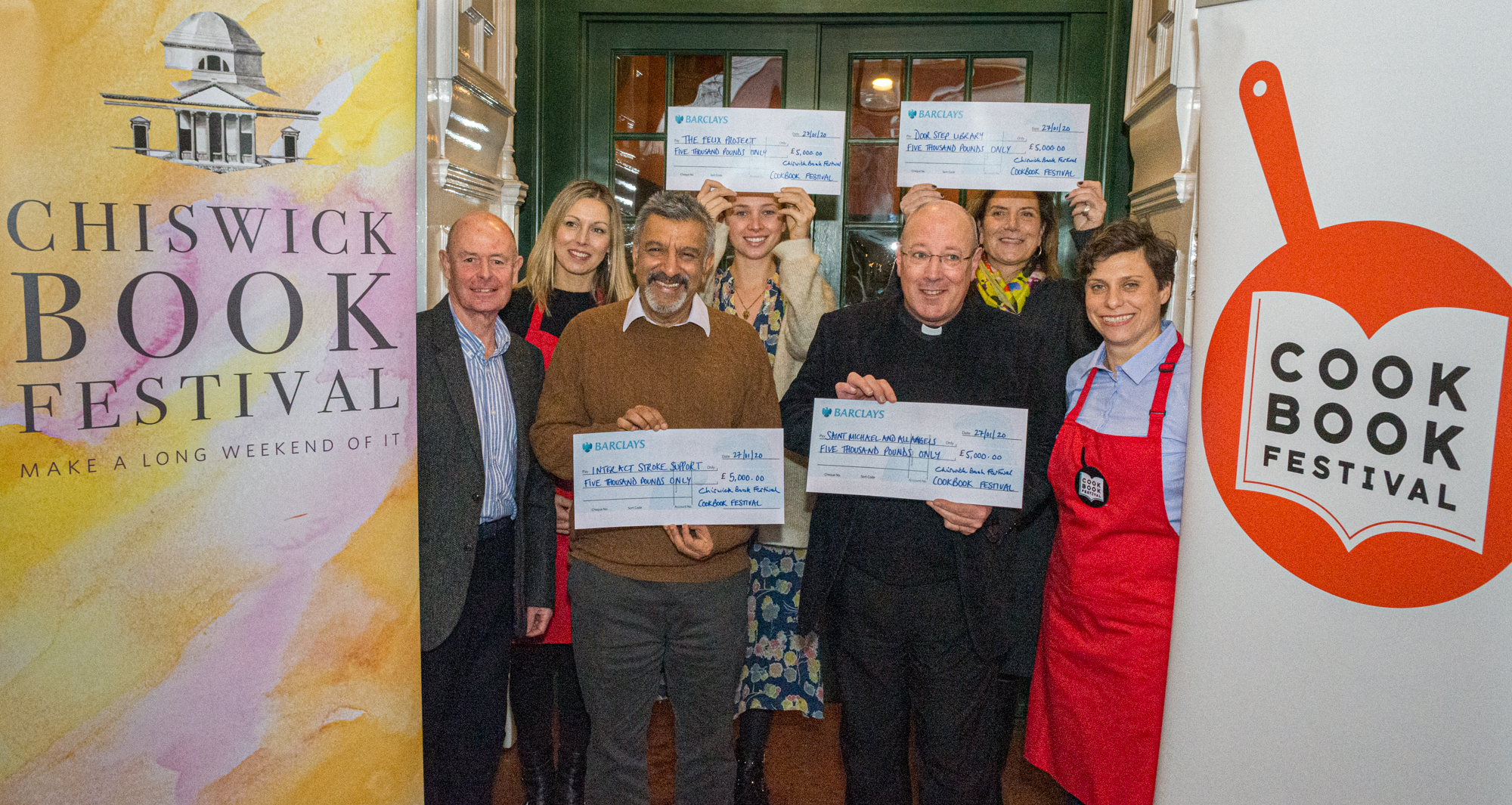 The presentation took place at St Michael & All Angels Church, Bedford Park, which hosts and runs the Festivals, and which also received a £5,000 donation.

Torin Douglas, director of the Chiswick Book Festival, said: “This is a significant increase in the amount we and the Cookbook Festival have given to our charities and we’re delighted for them. It’s our first year supporting The Felix Project, who were introduced to us by the Cookbook team, and we look forward to working with them to find more volunteers and raise more funds in Chiswick.”

Jules Kane, of the Cookbook Festival team, said: “I’m super proud to be part of the amazing Cookbook team that helped raise £5,000 for our chosen charity The Felix Project, who do fantastic work. Thank you to all who made it possible and supported us.”

The Felix Project is based in west London and distributes food to charities and schools that would otherwise go to waste. Isabella White, its community and challenge events fundraiser, said: “I am honestly so chuffed by how much was raised from this event. I announced this news to the entire office and we are all so delighted! This really is a significant amount and will make such a difference to the thousands of lives we touch daily.”

InterAct Stroke Support and Doorstep Library Network have both been supported by the Chiswick Book Festival for several years.

Nirjay Mahindru, chief executive of InterAct Stroke Support, which employs actors to read to stroke patients in Charing Cross Hospital, said: “This is wonderful news. £5000 is the equivalent of half a year’s work at Charing Cross being fully paid for. We cannot thank you and the team enough.”

Annabel James, chair of Doorstep Library Network, which brings the magic of reading into the homes of families in disadvantaged areas of London, said: “This is fantastic news and an incredibly generous donation.  Thank you so so much.  As you know, it will make a real difference and enable us to continue our work with children and families in West London.”

The Chiswick Book Festival is run by St Michael & All Angels Church as an important part of its outreach in the community. To mark the 140th anniversary of its building in 1879 and consecration in 1880, the church is seeking more volunteers and donations for its arts, charity and community activities throughout the year.

For more than 50 years, St Michael’s has organised the Bedford Park Festival and Green Days weekend and it will celebrate the 140th anniversary at this year’s Festival, which runs from June 12th to 28th 2020. This year’s Chiswick Book Festival will take place from September 10th to 14th 2020.