“Don’t be alarmed,” he said. “You are looking for Jesus the Nazarene, who was crucified. He has risen! He is not here. See the place where they laid him.”

“He is not here: for he is risen, as he said. Come, see the place where the Lord lay.” 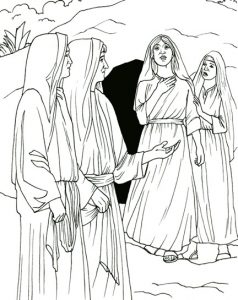 Happy Easter everyone! How many of you plan to have an Easter egg hunt today? I’ve got eggs hidden in the garden ready to be hunted. Instead of chocolate eggs (which are very delicious) I have made my own very special Easter eggs, which you can find out how to do in the activity section later on.

Painted on the first egg is a cross. The cross reminds me that Jesus willingly carried his cross to Calvary to die for my sins. No one told him he had to do it, he did it because he knew that was the only way that I would ever get to heaven. God loved me so much that He sent His only begotten Son so that I could have everlasting life.

Painted on the second egg are three nails. They remind us that Jesus was nailed to the cross. The nails that they used to nail Jesus to the cross weren’t little nails like these. They were great big nails. Can you imagine the pain he must have felt? He suffered great pain as the nails were driven into his hands and feet. He suffered the pain to pay the price for our sins.

Painted on the third egg is a stone. The Bible tells us that after Jesus died, they placed his body in a tomb and put a huge stone over the entrance. On Sunday morning, two women went to see the tomb and the stone had been rolled away and the tomb was open. The stone reminds us that even a huge stone could not keep Jesus in the grave.

We thank you, Father, that you loved us so much that you sent your only Son to die for our sins. We are thankful that his story does not end with his death, but that we serve a risen Saviour! In Jesus’ name we pray. Amen.

Ask an adult to help you.

You need:
4 chicken eggs
A pin
A bowl
Paints/colouring pens

Poke a small hole at each end of the end, one hole should be slightly bigger than the other – you could put a small bit of sticky tape over each end to stop the egg from cracking.

Hold the egg over a bowl (to catch the liquid) and blow through the smaller hole. The inside of the egg should come out into the bowl. If it doesn’t come out easily, ask an adult to use a straightened paper clip or skewer to poke into the egg to break up the inside so that it passes through the hole more easily.

Once your eggs are hollowed out they are ready to decorate. Handle them carefully – they are very delicate!!

On one egg draw a cross – like the crucifix Jesus carried

One the third egg draw a boulder, like the one in front of Jesus’s tomb

One the fourth egg I want you to decorate with the happiest Easter picture you can think of. You could even use tissue paper and sequins to decorate it.

Don’t forget to send in pictures of your eggs to parishoffice@smaaa.org.uk and have a Wonderful Easter Day 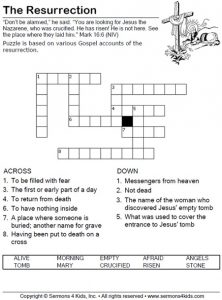