Sunday 24th May – Ascension – “He was lifted up, and a cloud took him out of their sight”.

1 In the first book, Theophilus, I wrote about all that Jesus did and taught from the beginning 2 until the day when he was taken up to heaven, after giving instructions through the Holy Spirit to the apostles whom he had chosen. 3 After his suffering he presented himself alive to them by many convincing proofs, appearing to them during forty days and speaking about the kingdom of God. 4 While staying[a] with them, he ordered them not to leave Jerusalem, but to wait there for the promise of the Father. “This,” he said, “is what you have heard from me; 5 for John baptized with water, but you will be baptized with[b] the Holy Spirit not many days from now.”

6 So when they had come together, they asked him, “Lord, is this the time when you will restore the kingdom to Israel?” 7 He replied, “It is not for you to know the times or periods that the Father has set by his own authority. 8 But you will receive power when the Holy Spirit has come upon you; and you will be my witnesses in Jerusalem, in all Judea and Samaria, and to the ends of the earth.”

9 When he had said this, as they were watching, he was lifted up, and a cloud took him out of their sight.
10 While he was going and they were gazing up toward heaven, suddenly two men in white robes stood by them.
11 They said, “Men of Galilee, why do you stand looking up toward heaven? This Jesus, who has been taken up from you into heaven, will come in the same way as you saw him go into heaven.”

Imagine you are holding a big balloon on a string.

I’m sure you know that when filled with helium, a balloon floats in the air. And it’s also quite enjoyable when it does float away from you.
It’s fun to stand and watch as the balloon floats higher and higher into the heavens until it totally disappears.
The only way to experience that is to be willing to let it go.

In today’s Bible lesson in the book of Acts, we learn that when Jesus was ready to return to heaven, He took His disciples aside to make sure that they understood everything that had happened to Him.
He explained why it was important for Him to be crucified and to be raised from the dead to fulfill what the Scriptures had said about Him.
He also told them that he was going to return to His Father in heaven and that the Holy Spirit would come to be with them.

I don’t know how all of this looked, but in my imagination I can see the disciples standing and watching as Jesus ascended higher and higher until He disappeared from view. Were the disciples sad? No way!
The Bible tells us that when Jesus had gone up into heaven, the disciples worshipped Him and returned to Jerusalem with great joy.
They stayed continually in the temple, praising God.

Dear God, Thank You for sending Jesus, Your only Son, to die for our sin.
We know that He has risen from the dead and has returned to heaven.
Bless us today as we worship Him with great joy! In Jesus’ name, Amen. 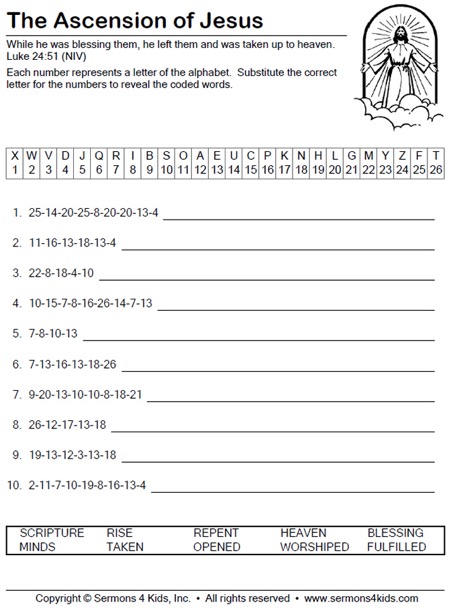 Draw a picture of a balloon, as big as you can, and colour it your favourite colour.
Then write in big letters JESUS IS RISEN TODAY.

Ask if you can stick this up in your window for people passing by to see, or on your wall at home.

Activity 2: Write a poem
Write a poem about floating or flying. How it would feel if you could float up in the sky?