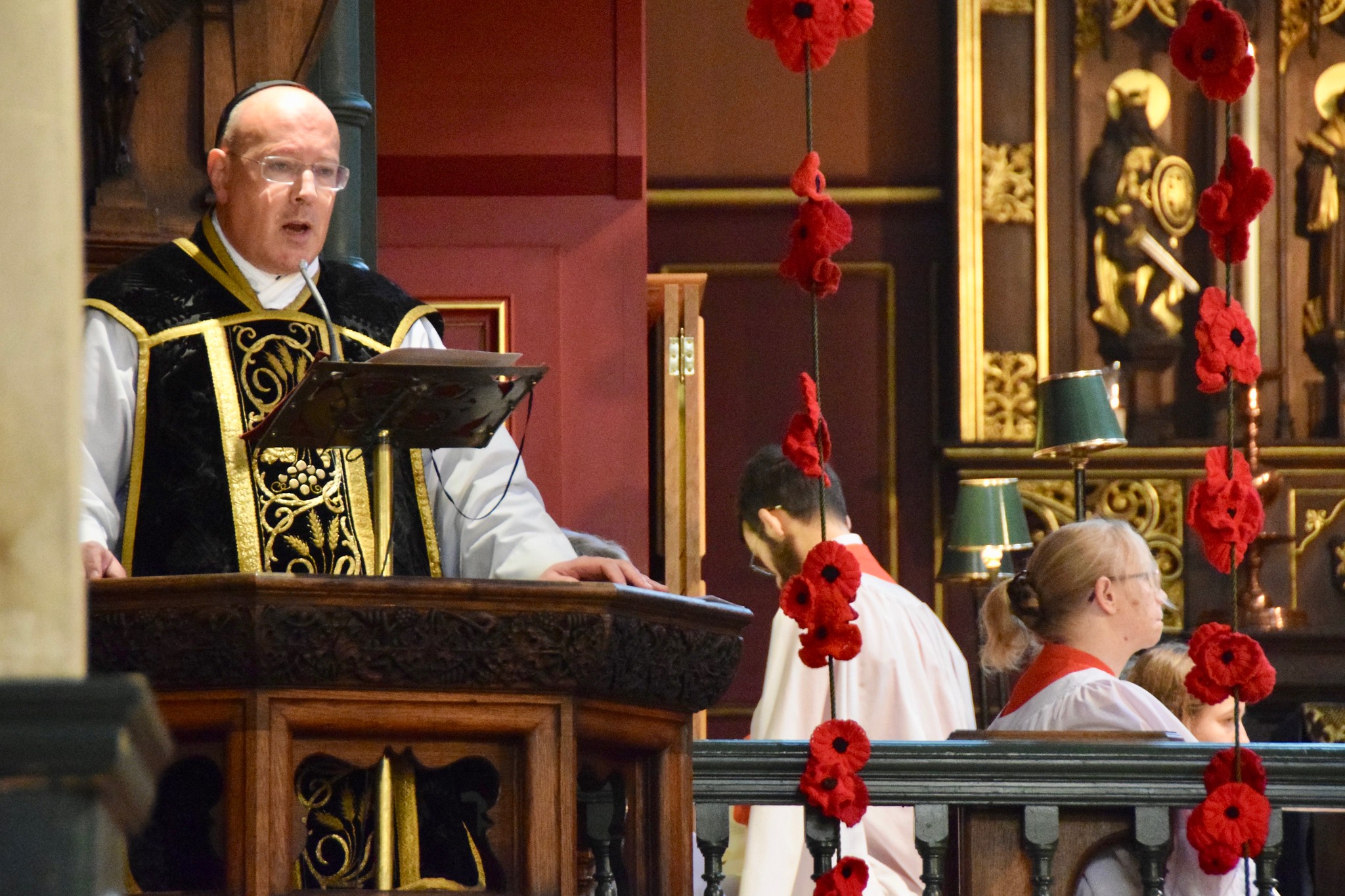 St Mark tells us, in his Gospel today, of Jesus talking to his disciples about coming signs of disaster and distress: ‘the sun will be darkened, the moon will lose its brightness, the stars will come falling from the heavens and the powers of heaven will be shaken.’

There will be a time of deterioration all around, a declining, a lessening, a time of darkness where everything they have grown to rely on will be shaken up.  It is human experience, but it might easily be dismissed as 1st century irrational superstition or poetic hyperbole. Yet we might deliberate on whether there are such signs around us today.

We might think deeply about the Cop 26 conference which met in Glasgow, and the dire warnings from scientists worldwide about the devastating effects of climate change, and the emphasis yet again on how inter-related we are with each other as human beings and with planet Earth. Urgent action is needed at every level of society and world-wide if we are to stave off disaster. This means a change in heart and mind if we are to change our behaviour.

And Jesus goes on to say that amidst the signs of disaster, the disciples are also to see with the eyes of faith the coming of God. ‘And they will see the Son of Man coming…’ God as we know Him in Jesus Christ.  How are we to respond to the coming of God in the midst of darkness, disaster and the suffering, and despair we see all around us?

Recently I quoted a senior academic (1) who said:

“I used to think that the top global environmental problems were biodiversity loss, ecosystem collapse and climate change. I thought that with 30 years of good science we could address these problems, but I was wrong. The top environmental problems are selfishness, greed and apathy, and to deal with these we need a spiritual and cultural transformation. And we scientists don’t know how to do that.”

‘And they will see the Son of Man coming….’

This is the greatest physical and spiritual challenge humanity has ever faced.

Love the Lord your God. Love your neighbour. Be good stewards of the earth and all that is in it. This is the challenge we face, because we recognise in ourselves greed, envy, laziness, indifference, and our insatiable desire for more and more stuff.

And amidst all this very challenging teaching Jesus says to the disciples “Take the fig tree as a parable.”
The budding fig tree becomes a sign, a way of realising that the Kingdom of God is present.  Work with it! Jesus is reminding us that the effect of the Kingdom of God is like springtime on this fig tree, when the sap rising through its limbs makes tender the branches which have become stiff and dry through the winter and causing the leaves to sprout forth. It is a sign of Hope. It is a sign of the power and energy of the Holy Spirit within our midst, prompting us to change our mind, to change our heart, to change our behaviour and our actions.

And such thinking as not so far off the mark on this Remembrance Sunday.

John Lewis-Stempel is an English farmer and an historian. He has written a fascinating book about the First World War, called ‘Where the Poppies Blow.’ (2)

It tells of the experience of soldiers in the trenches through their engagement with the natural world, which they encountered through the horror, boredom, and filth of the trenches. It came as a surprise to me, and it might to you, that so many British soldiers spent time in the trenches cultivating gardens – for the practical needs of gaining food, but also there was a pride and interest in creating small flower gardens on the rear ramparts of the trenches. Why did they do this? To relieve the crushing boredom, to alleviate the fear and panic of imminent death – yes most probably. But also, at a deep level they were a powerful remembrance of home, and in a life which could seem callously random, they offered some semblance of control and order in a disordered and distorted world.  Lewis- Stempel comments: “Love of flowers in the trenches was similar to love of religion. Few British soldiers declared it, almost everyone had it.”

This connection with the natural environment, amidst all that horror, was of profound importance because it goes a long way to explaining why they fought, and how they found the will to go on. At the most basic level, animals and birds provided interest to fill the blank hours in the trenches and billets – birdwatching, for instance, was probably the single most popular hobby among officers. But perhaps more importantly, as Lewis-Stempel attests, it was ‘the ability of nature to endure, despite the bullets and the blood, gave men a psychological, spiritual, even religious uplift. The unconquerability of nature provided the reassurance that life would go on, that after all there was a purpose and meaning to things.”

It spoke of ultimate things, of beauty and goodness and God in his creation.

The poppy has become the defining symbol of remembrance. Scarlet corn poppies grow naturally in conditions of disturbed earth throughout Western Europe. When the fields of Northern France and Flanders were ripped open as World War One raged through Europe, the poppy was one of the few plants to grow on those bleak battlefields. During the Second Battle of Ypres in 1915, the Canadian surgeon, John McCrae, fresh from a funeral of a friend on the battlefield, wrote one of the most frequently quoted poems of the war:

‘In Flanders Fields the poppies grow
Between the crosses, row on row,
That mark our place.’ (3)

The poppy has come to represent the immense sacrifice made by those who died in the Great Wars and so many conflicts since. It was adopted by the Royal British Legion, who celebrate the centenary of their founding this year, and in 1926 a poppy factory was opened in nearby Richmond to offer employment to wounded soldiers returning from the War.

Today, we honour the work of the Royal British Legion, and all collectors for their Poppy Appeal, for their care of Service personnel and their families over this last century, and for their commitment to honouring all those who have given their lives in war.

The simple red Poppy has become the most eloquent expression of the deep sorrow and gratitude that so many feel for those who have given their lives, sacrificed themselves, in time of war. To quote the poet Isaac Rosenburg, ‘Poppies whose roots are in man’s veins.’  In the Poppy we glimpse an image and picture of the bravery and brutality of war. Seeing in this simple annual flower, and in its short and brilliant flowering, the image of a generation cut down all too soon. But rather than simply looking back, the Poppy also points us forward. In the trenches flowers became a sign of hope and deep spiritual epiphany. That in these simple flowers emerging through the rubbles of that seemingly God-forsaken landscape of no-man’s land something good, something beautiful might and could and should emerge.

“And they will see the Son of Man coming…” God is coming to us all the time, if we could but open our hearts and minds to see Him, so that good might come out of bad.

This is the greatest physical and spiritual challenge humanity has ever faced.

Love the Lord your God. Love your neighbour. Be good stewards of the earth and all that is in it. This is the challenge we face. We recognise in ourselves the need for spiritual transformation, as we acknowledge that our own greed, envy, laziness, indifference, and our insatiable desire for more and more stuff, must give way to self-sacrifice, Christ like love and the working for the Kingdom, that it may come on earth as in Heaven.

In the simple Poppy, we are given again this same picture, this same movement. That even in the blasted broken reality of the trenches something new might and should emerge. So, as we wear our Poppies, as we lay them in remembrance at the Memorial Seat, we not only look back with sorrow and thankfulness, we look forward with hope and recommit ourselves to the truth and blessing that we might be peace makers, and in doing so we will become children of God.