On the first Friday of every month, from 12.30 to 1.15pm, we hold a short organ recital.
Admission is free, with a retiring collection in aid of St Michael & All Angels music provision.
See the forthcoming recitals at Organrecitals.com. Kindly supported by Ballet4Life.com. 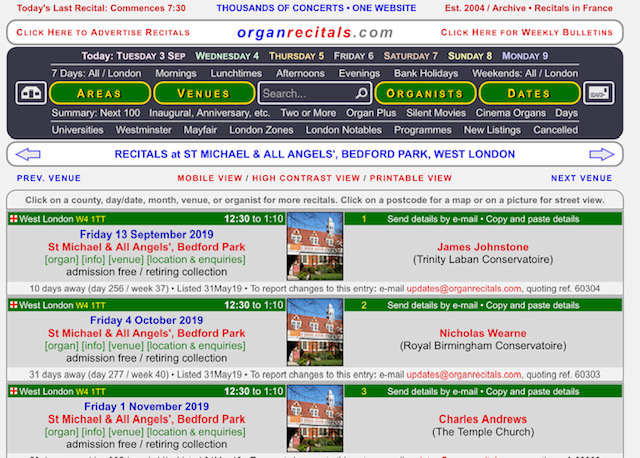 Friday September 13th        James Johnstone (Guildhall School of Music & Drama, and Trinity Laban Conservatoire of Music and Dance)
(on a Victoria and Albert theme for the Chiswick Book Festival

Charles Andrews studied at the Royal College of Music with the aid of a Douglas & Kyra Downie Award. The RCM awarded Charles the Harold Darke Memorial Prize for organ. Charles was Associate Director of Music of All Saints, Margaret Street from 2011-16. He is Accompanist of Hertfordshire Chorus. Recently Charles has performed at Newbury Spring Festival with London Symphony Chorus, Christopher Summer Festival in Vilnius and the International Organ Festival of Ivan Sokol in Slovakia. He has given the first performances of works by David Briggs and Philip Moore.

Nicholas Wearne is a prize-winning organ recitalist who has performed in venues which include Suntory Hall, Tokyo; St Thomas Church, Fifth Avenue, New York; and at Cathedrals in Berlin, Canterbury and Washington. He combines his playing career with the posts of Organ Tutor and Junior Fellow at the Royal Birmingham Conservatoire, where he enjoys working with very inspiring pupils and colleagues.

Previously he was Organ Scholar – and later Assistant Organist – at New College, Oxford, and Organist at the University Church. This was followed by positions at St Mary’s Cathedral, Edinburgh, and St Martin-in-the-Fields, London. Whilst at Oxford he took BA (hons) in Music and MPhil in Musicology and Performance. Winner of the Poul Ruders Prize at the 2011 Odense International Organ Competition, he was invited to record his performance, and the subsequent release received an ‘Outstanding’ recommendation in International Record Review and an ‘Editor’s Choice’ in Gramophone. Nicholas has been involved in many other critically-acclaimed recording projects as soloist, accompanist or continuo artist, and has recorded and given the first performances of several contemporary works.

In addition to his work as a soloist, Nicholas is an experienced accompanist and continuo player who has performed with the Academy of Ancient Music, the European Union Baroque Orchestra and the Dunedin Consort in venues which include the Barbican and the Concertgebouw. He has worked extensively in Asia, Canada, Europe and the US, and broadcast live on BBC radio and television, as well as on other networks. A sought-after educator, before working at the Royal Birmingham Conservatoire, Nicholas taught at New College, Oxford, at Trinity Laban, and at schools in Edinburgh and London. He is frequently invited to tutor on specialist courses by such organisations as the Edinburgh Organ Academy, the St Andrews University Summer Organ School, the Royal College of Organists, and for Oundle for Organists.