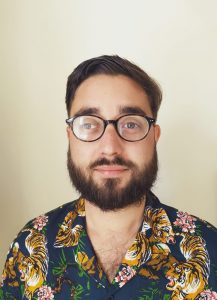 Our lunchtime concerts take place on the first Friday of the month. They are kindly sponsored by Ballet4Life. Admission is free with a retiring collection (please add Gift Aid where possible) for the church’s music fund.

This month’s organist will be Robert Hainault, Organist at St Anne and All Saints South Lambeth.

Robert Hainault began his organ studies with Alan Phillips in Messingham, North Lincolnshire and was appointed Organist of the Parish of Bottesford, Ashby and Riddings as a teenager, during which time he was awarded several First Prizes in piano, organ and composition at the Scunthorpe Music Festival alongside serving as Music Director of Barrow Silver Band and Conductor of Brigg Amateur Operatic Society. Upon moving to London to study English at Queen Mary, University of London he began improvisation lessons with Neil Wright and was appointed one of the organists for Queen Mary, Barts and the London School of Medicine and Dentistry and Organ Scholar at St Thomas of Canterbury Brentwood, and then Director of Music at St John the Evangelist Palmers Green.
.
He is currently Organist at St Anne and All Saints, South Lambeth and under the tutelage of Victoria Hay recently attained his DipABRSM in organ performance. Robert is a keen composer and has been shortlisted for several prestigious national and international competitions. His work has been commissioned by the London Festival of Contemporary Church Music, the choir of St Bride Fleet Street, and the choir of St John of Jerusalem South Hackney. When not playing the organ or writing music, Robert teaches piano, voice, and organ at the New London Performing Arts Centre and plays poker. He loves swimming and vegan cuisine – the latter making him increasingly buoyant.
.