Plans for a Memorial Space at St Michael & All Angels

The removal of any tree is often controversial, and this can be identified as an issue separate from any other aspect of the proposals. People have asked us to say more about why we want to remove the yew tree, as described in the planning application:

1.3 The proposed works include:
• Removing a Yew tree improving views of west elevation and entrance to grade II listed SMAAA 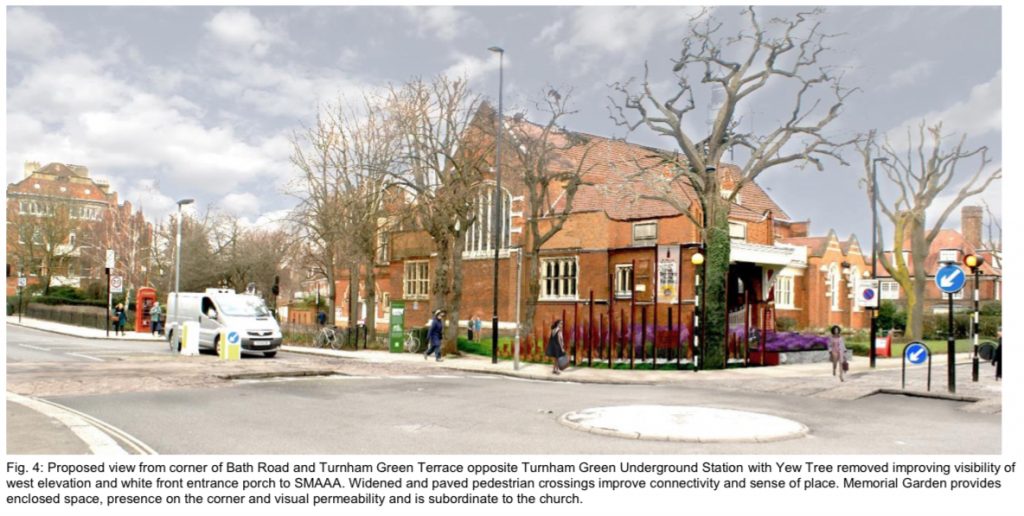 Above: Artist’s impression of view from Turnham Green Terrace

Yews are a resonant feature of many churchyards – particularly in the country – and the English landscape has many very ancient examples, which are famous expressions of continuity and history. The Church of England says: “Nowhere else in Europe can boast so many venerable yews in its churchyards, with many dating back to the birth of Christ and beyond. For such trees, there is guidance available on the Ancient Yew Group website.”

Our Yew is not one of these:

It is not ancient and this is not a country churchyard. It is not part of the Deciduous planting of Bedford Park, nor part of the original scheme of planting and it blocks the view of the west facade and main entrance of the Grade II listed church (see Fig 3, top). The yew being an evergreen, the situation is not even seasonal. In addition, the dense and dark evergreen canopy effectively deters anything else from growing under or around it. The removal of the tree is a prerequisite of making anything of the space.

We can see from old photographs and paintings (below) that the church was not in earlier years shrouded by vegetation and densely hemmed in by trees. The yew in particular has got so big as to completely obscure the view of the building from the approach from Turnham Green Terrace, Acton Green and the tube station.

We think that as a result of the removal of these trees the church would be better appreciated from one of the best-angled views of it, and would have a better setting.

There is a precedent for the removal of trees close to the church:

“When I was first a member of the St Michael’s community, the path to the south door was flanked by (I think) lime trees, which were occasionally pollarded to keep them vaguely under control. They meant that even the front door was barely visible from across the street, but when removal was suggested it was not without its opponents. Looking at old photos in which they feature, I doubt there will be many people who would want them back!

“I think that the removal of the yew tree – and at least one of the other small trees between the Triangle pathway and the church – is highly desirable, whatever the details of the landscape proposals are.”

And over the years, many trees in and around the church have been removed.

See the picture below from 1909, which shows many trees along the Bath Road and west of the church. Taken from Bedford Park: Pictures from the Past by Sandra Grant & DW Budworth. Other pictures from the planning application by Paul Vick Architects. 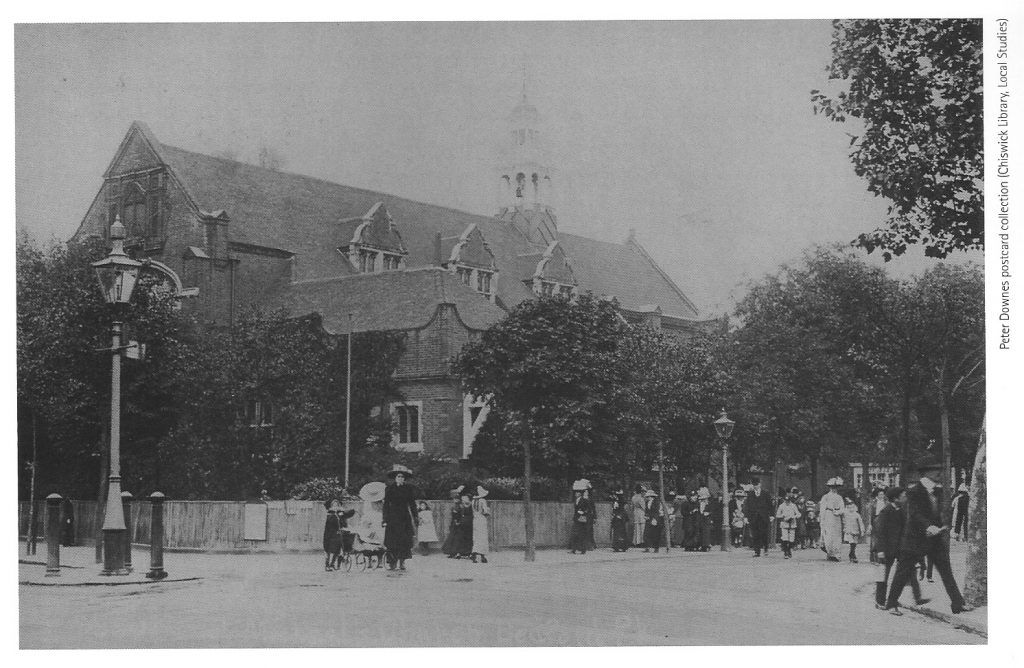 Extracts from the proposals:

4.2.1 The Yew Tree on the corner has a Tree Preservation Order, to highlight that it has a contribution to the landscape. Any proposal to remove it must justify the high level of enhancement that would result after its removal.

ii. It blocks views of grade II listed church (see Fig 3) and is detrimental to its setting. Planning policy is in line with the historical intention to see the facades particularly on this significant corner.

iii. It particularly blocks views of the entrance porch. Two TPO’d trees were previously removed adjacent to the porch in order to improve the visibility and this proposal is the next logical step in improving the corner and setting of the church. Views of the clock memorial to the Boer War on the West elevation would also be improved.

4.2.3  Consideration has been given to pruning the tree, e.g. to 40% of its volume, which would reduce its impact. This would clearly only be a part measure and not address the concerns above particularly.

4.2.4  Consideration has been given to the Yew tree in terms of its significance of Yew trees and planting of them in their own terms. Some Yew trees have gained significance in themselves, for example, famously at Mount Garden Hampton Court which had been shaped as topiary and commented on as far back as 1599.

4.2.6 The Yew at SMAAA does not have the same significance. It was:
– not part of the original scheme,
– nor does it go back a long period of time evoking the fact it has survived or as ‘ancient’,
– nor does it stand as a sentinel or object in its own right, and was later tucked in behind the original tree scheme surrounding SMAAA (see Figs 2, 6 and 7)

4.2.7 A particular association is with the planting of Yew trees in graveyards, particularly in rural parish churches. This is
– neither a churchyard
– nor a rural parish church.
– The authors are not aware of this area around the church having ever been a graveyard. Therefore, no significance is gained in these terms.