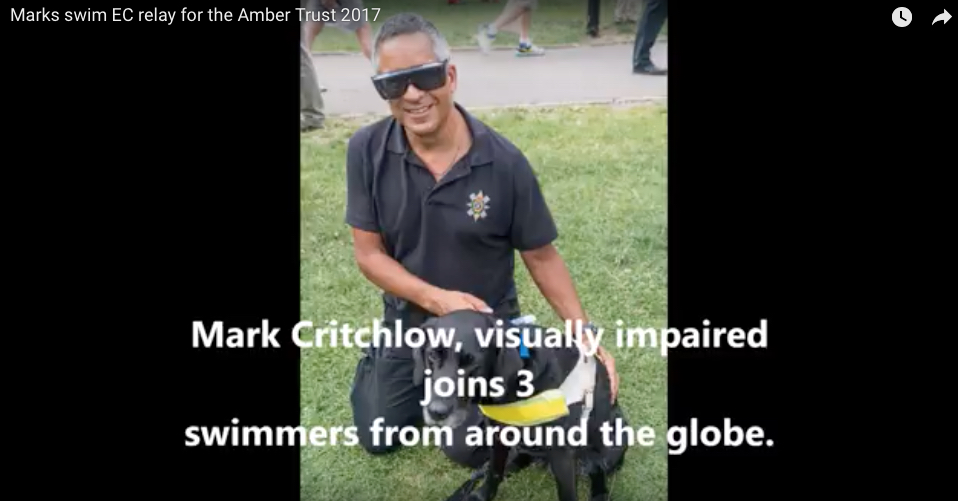 In August 2017, Mark Critchlow completed his charity swim across the English Channel as part of a four-person international team – Team Swimmingly. The swimmers – Mark, Etienne from France, Brian from the USA and Kate from Australia – swam in relay, for an hour at a time. Mark was swimming to raise money for The Amber Trust, our newest charity, which helps blind and partially-sighted children make the most of their musical talents. Thanks to those who have donated. Fundraising is now closed but you can see the donations and messages on his UK VirginMoneyGiving page, which shows that he raised £9,387.50.

Below we record some of the key moments, together with videos and media coverage – please scroll down to see them all.

October 24th – Mark receives a letter of thanks and congratulations from Camilla, Duchess of Cornwall, president of The Amber Trust. 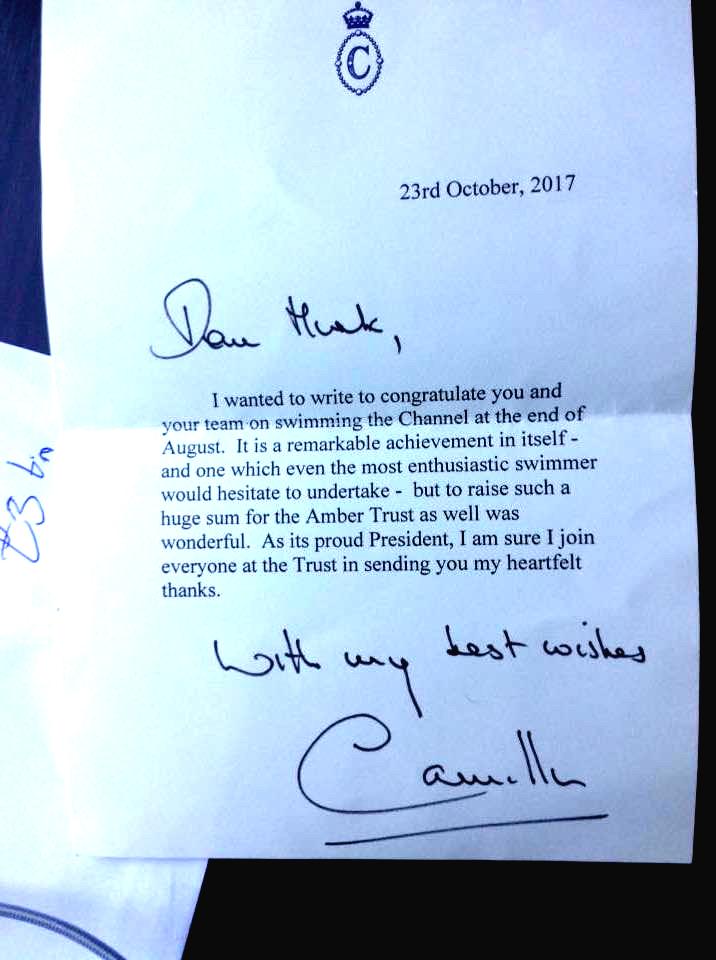 September 15th-17th Chiswick Book Festival – Mark shares his story and discusses overcoming adversity with Paralympics TV presenter Clare Balding and adventurer Sarah Outen. On Facebook he wrote: “To round off what has been a truly amazing 5 month journey I got to talk about overcoming adversity with two wonderful women. Clare Balding and Sarah Outen at the Chiswick book festival. Please consider helping overcome adversity by donating to the Amber trust through my sponsorship page. A heartfelt thanks to all who have supported my effort in any way, so far.” 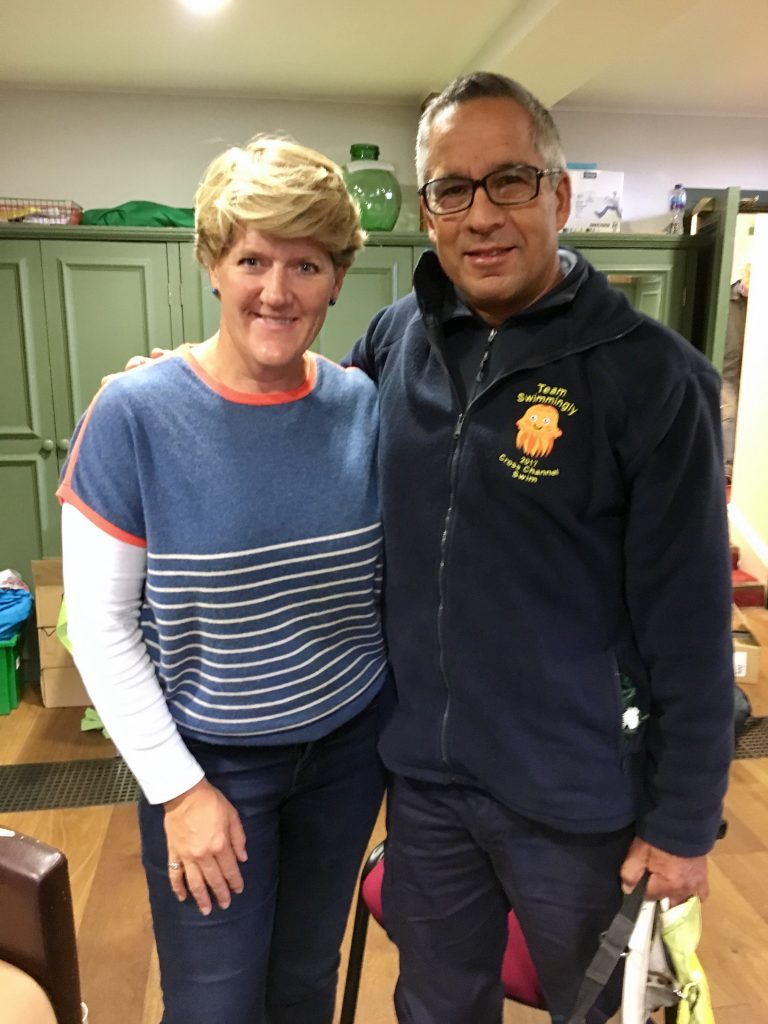 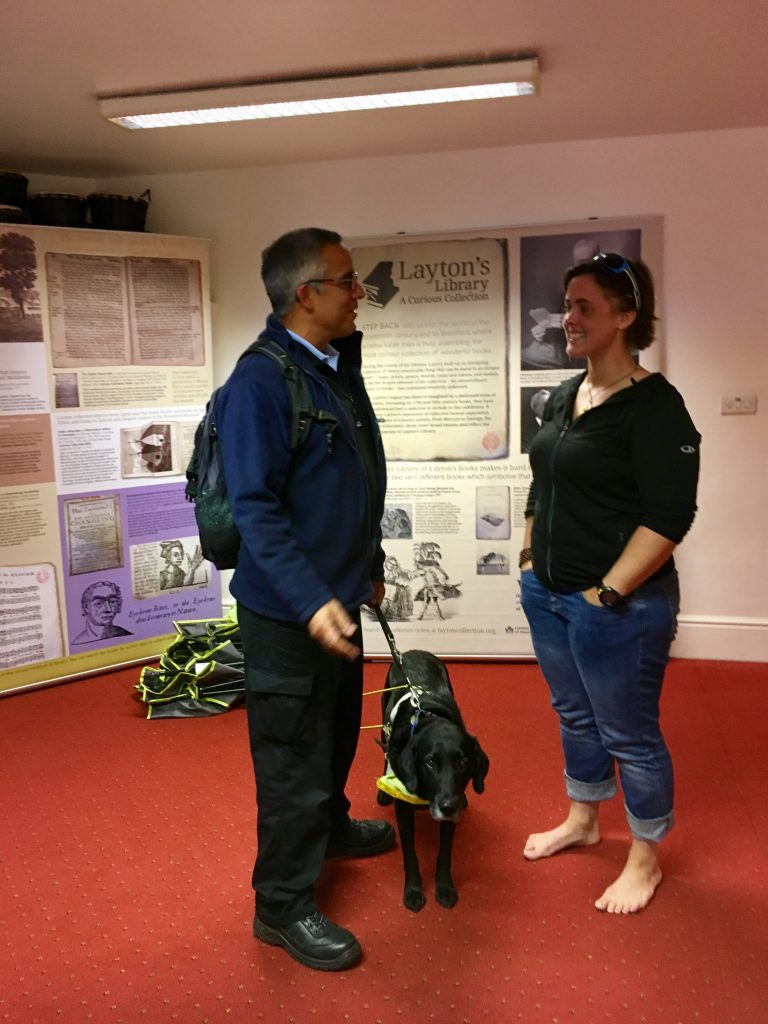 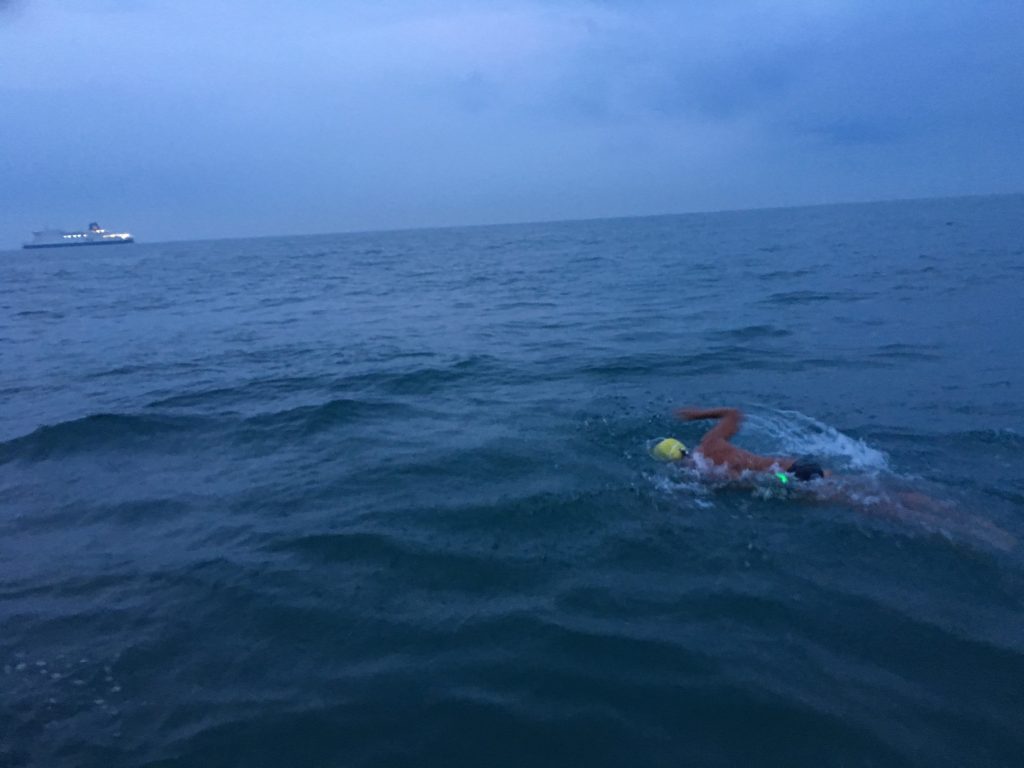 Tuesday August 29th – Mark sends us a short video of his most dangerous time, swimming in the dark.
Between 0500 and 0540 he was swimming in pitch darkness and couldn’t see the pilot boat he was meant to be following. They could see him because he had a white light on his goggles strap and a green light on the back of his swimming trunks. “I couldn’t see a thing and I was really scared” he says. “They had a light on the boat but it wasn’t strong enough. I came to a halt. Eventually they used a flashlight which I could just make out.” 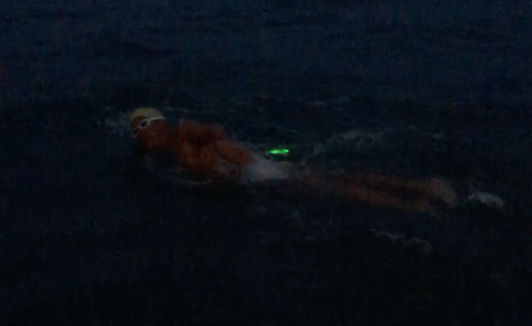 Sunday August 27th – 3pm – Mark celebrates with friends from St Michael & All Angels Church at the Tabard pub in Chiswick
Total donations at this stage, including Gift Aid, have reached:£7,448.75. 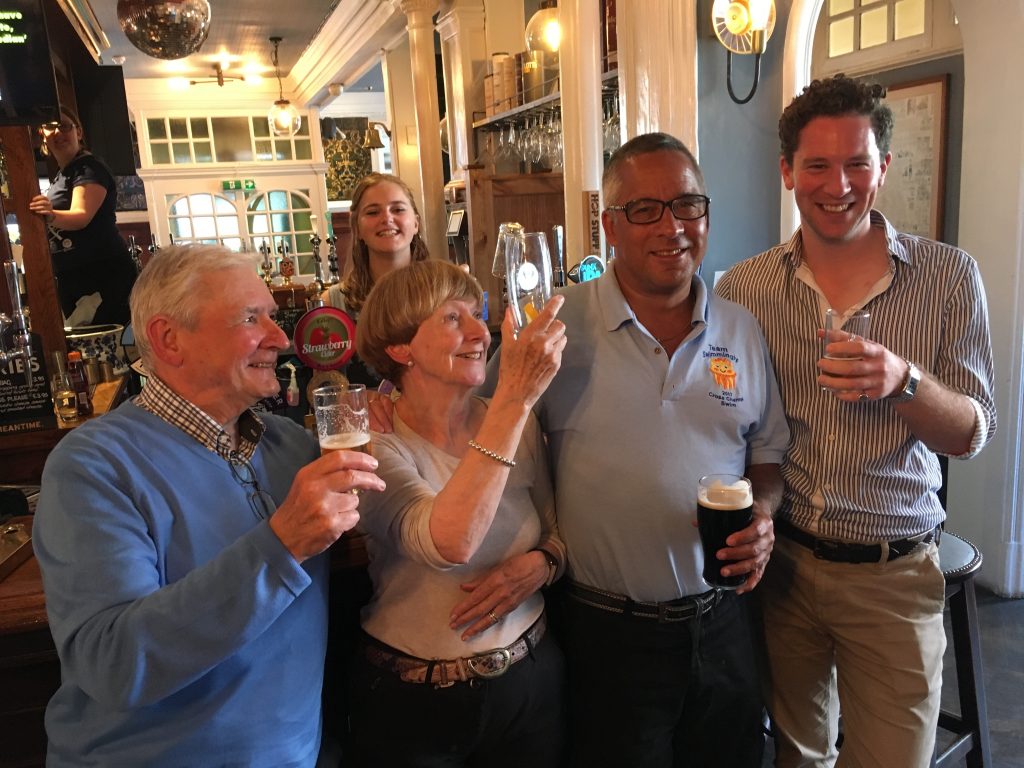 Sunday August 27th – 10.15am – Fr Edward Barlow tells the congregation at St Michael & All Angels that Mark has competed his swim.

Saturday August 26th around 17:00 – Team Swimmingly are reunited in Dover with their support team from the Channel Swimming Association 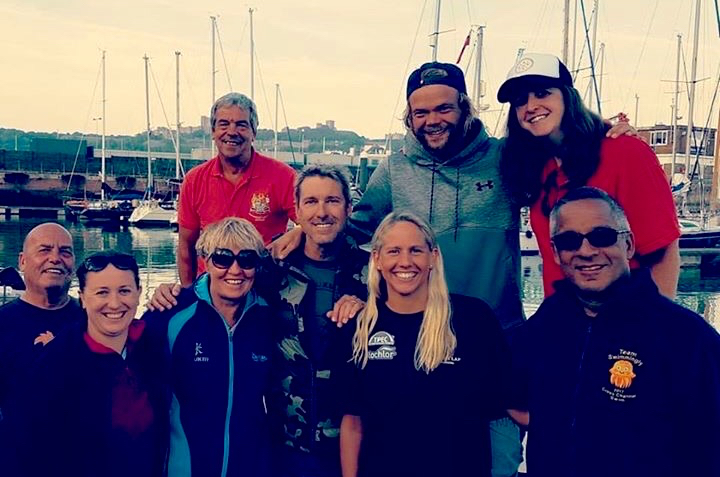 Team captain Chloe McCardle wrote on Facebook:
SO PROUD OF THIS AMAZING ‘TEAM SWIMMINGLY’ who swam the English Channel today.?

? and met in person as a team for the first time yesterday. Through my training program they have bonded over Skype, email and worked hard in their training and on my swim camps. Each person achieved a huge milestone.

?Brian Wing only swam the length of Windermere 3 days ago (10.5miles/17km) and worked so hard on recovery and giving everything today (Brian is on track for his English Channel solo with me next year)

?Etienne struggled with the cold water at July camp and worked incredibly hard to lift his cold water acclimitisation (Dory/Deb a volunteer -& previous channel relay swimmer-was so wonderful buddy swimming with Etienne on camp to get him through 2hrs at 15.5C),

?Mark struggled to access training due to his limited vision and worked so hard to just get to training and was so courageous during his night swim on the relay

? Kate kindly said ‘yes’ to jump into todays relay even though she is going out in 7hrs with her original team. All these swimmers have grown and benefited so much for being on this program and i am so humbled to be part of their journeys and witness their incredible transformations.

Saturday August 26th around 16:00  – Mark on the pilot boat Pathfinder returning to Dover 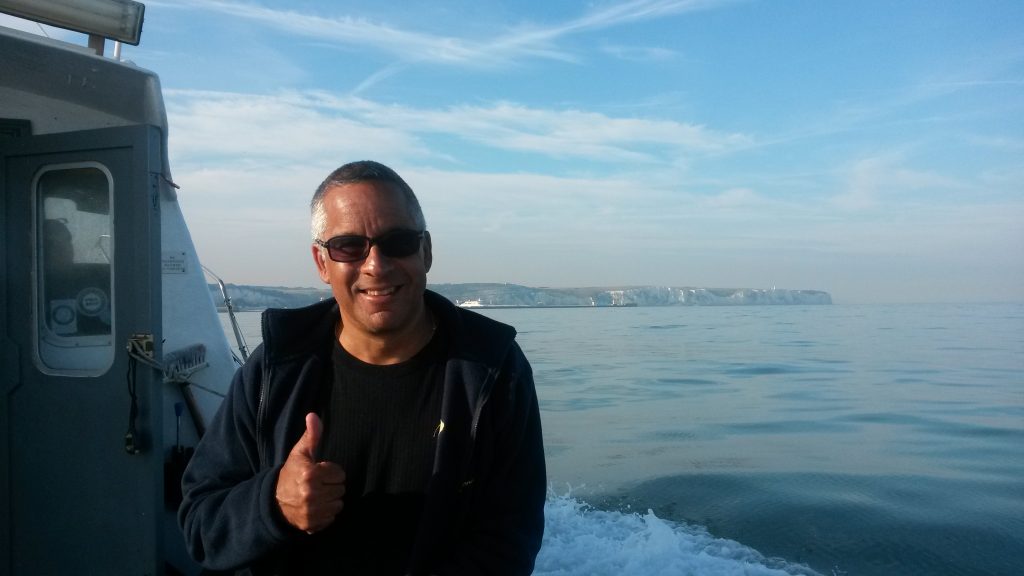 We followed Mark’s progress at the Channel Swimming Association tracking site. The boat supporting him was ‘Pathfinder’. If you clicked on ‘View track’ on that site, you could see the course that the team have swum (see image below at 17:15 Saturday). You can also follow the CSA on Facebook and Twitter. 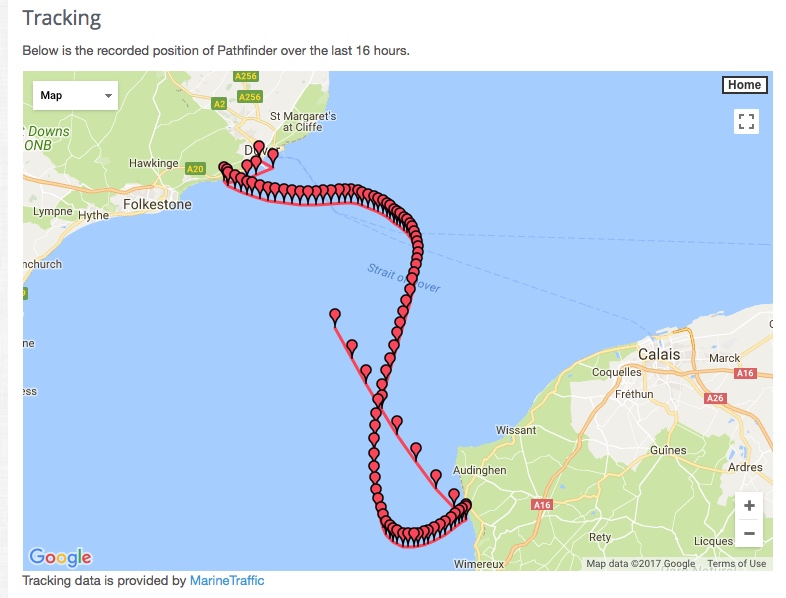 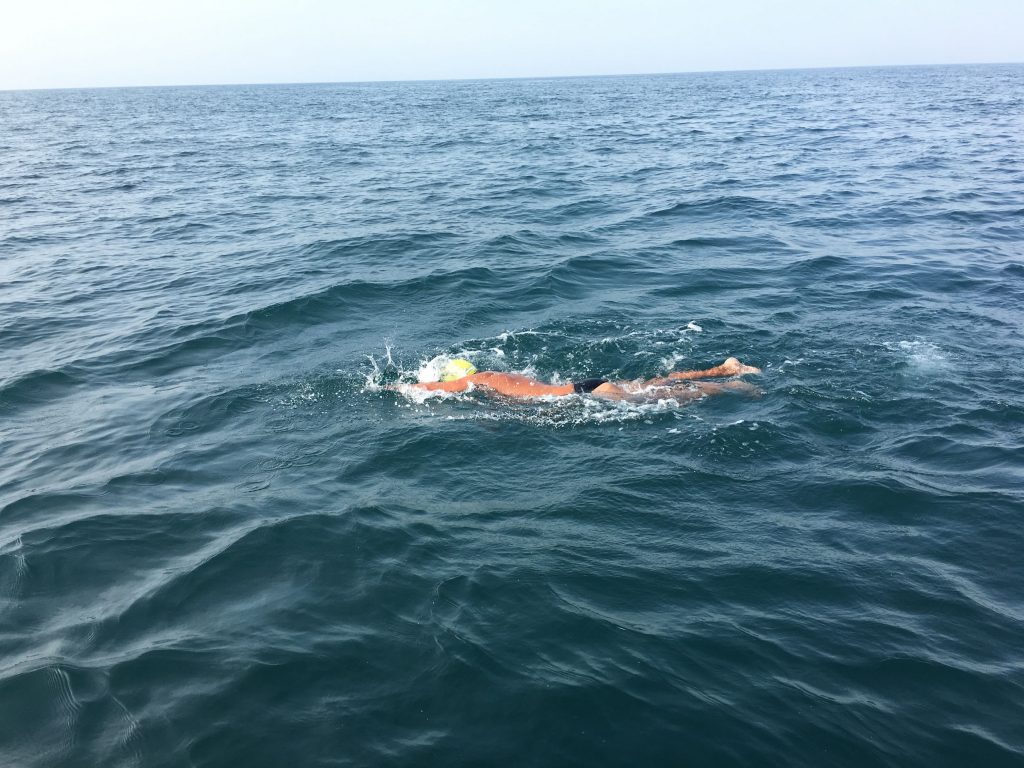 Saturday August 26th 2017  breakfast time – Mark crosses a shipping lane as the sky starts to get light (much to his relief!)
Between 0500 and 0540 he was swimming in pitch darkness and couldn’t see the pilot boat he was meant to be following. They could see him because he had a white light on his goggles strap and a green light on the back of his swimming trunks. “I couldn’t see a thing and I was really scared” he says. “They had a light on the boat but it wasn’t strong enough. I came to a halt. Eventually they used a flashlight which I could just make out.”

Saturday August 26th 2017 02:16 – The start: We receive this email from Mark
“Started from Samphire hoe. Brian 1st, Kate 2, Etienne 3, me 4. They want to limit my night swim for safety. Good conditions. Wont have contact for long. Csa tweet. “

Friday August 25th 2017 – Lunchtime – Mark travels to Dover, having arrived from holiday in Sardinia (via Milan) the night before.
On the journey he is told that the swim has been moved forward from Sunday to the early hours of Saturday morning and that they will be now swimming in a powerful spring tide.

Earlier, Mark had kept us informed about his training on his Facebook blog.
He showed us the tremendous challenges he would face in his promotional video: https://www.youtube.com/watch?v=EwCMLKYHmdY&feature=youtu.be

See Mark’s interview with Chiswickbuzz.net : Mark Critchlow is back at it once again swimming for charity! The visually impaired former athlete will soon swim the English channel for the Amber trust any date between 27th Aug and 7th Sept, subjected to weather conditions. Go ahead and support Mark on his courageous journey for charity, donations can be made via the link below!

Mark’s swim was also featured recently on ChiswickW4.com: A local resident, who is visually impaired, is to take on a swimming challenge across the English Channel, from Dover to Cap Gris Nez, to raise money for a charity supported by St Michael & All Angels in Chiswick.