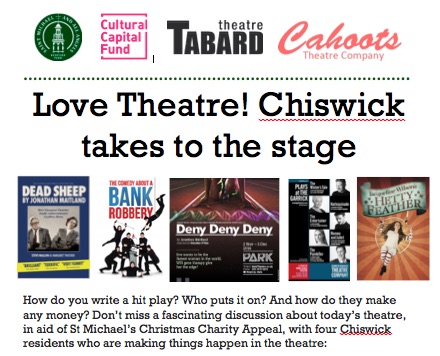 How do you write a hit play? Who puts it on? And how do they make money? Don’t miss a fascinating panel discussion and Q&A on today’s theatre, in aid of St Michael’s Christmas Charity Appeal, with four Chiswick residents, playwright Jonathan Maitland and producer Denise Silvey (‘Deny Deny Deny’, above), Fred Perry of the Tabard Theatre and investor and producer Bob Benton. Tickets £5 – Book here. Doors and bar open at 6.30pm, panel discussion starts 7pm.

Last year at St Michael’s, in ‘How to Make A Drama out of a Dead Sheep’,  Jonathan Maitland and Denise Silvey, of Cahoots Theatre Company, discussed how they brought the story of Margaret Thatcher and Geoffrey Howe to the stage (Steve Nallon as Margaret Thatcher, left). ‘Dead Sheep’ is now on a nationwide tour; their second play, ‘An Audience with Jimmy Savile’, was a 4-star sell-out hit in London and Edinburgh; and the third – ‘Deny Deny Deny’, about drugs in sport – has just opened at the Park Theatre in Finsbury Park.

On Friday November 25th, at 6.30 for 7pm, they return to St Michael & All Angels to discuss their new play and what they’ve learned, as part of a wider discussion on the state of theatre today – creative and financial – with two other Chiswick residents who are making things happen in the theatre:

– Fred Perry, co-artistic director of the Tabard Theatre;
– and Bob Benton, of Bob & Co and the Cultural Capital Fund.

Bob Benton founded the Bob and Co family of businesses (TV, film and theatre) in 2011 after a career in Investment Banking.  In 2014 he launched the Cultural Capital Fund, a unique private equity vehicle open to individuals which accesses the fast growing and exciting media content markets. The fund currently has 23% of its assets invested in 11 theatrical productions which include such major shows as Wicked, Beautiful – The Carole King Story, The Kenneth Branagh Season, The Comedy About a Bank Robbery, Red Shoes (Sir Matthew Bourne)  and the upcoming Dreamgirls.  Separately Bob and Co are currently involved in 15+ productions as producers , investors and commissioners of new plays under the Ghostlight name.