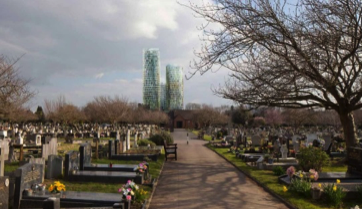 The Chiswick Curve will be the highest tower in West London and a precedent for further high rise buildings in the area. Please come to this meeting for an update and to hear from key speakers on important topics relating to this proposed development.  The meeting will be chaired by the architecture critic of the Observer, Rowan Moore and addressed by Andrea Lee, a Healthy Air Campaigner with ClientEarth, and Barbara Weiss, co-founder of the Skyline Campaign.

The meeting is being organised by a consortium of residents groups including the Brentford Community Council, the Kew Society and the West Chiswick and Gunnersbury Society. We are delighted that Andrea Lee a Healthy Air Campaigner with ClientEarth will speak on Air Quality and that Barbara Weiss, the architect and co-founder of the Skyline Campaign will speak on Tall Buildings. The meeting will be chaired by Rowan Moore, architecture critic of the Observer.

Those behind the Chiswick Curve think that this small, constrained site at the Chiswick Roundabout – surrounded by major roads in a highly polluted locality – is the right place for 330 residential units in a 32-storey tower. Anyone who is ahead of the curve knows that poor air quality and the harm caused by inappropriate tall buildings are of great concern to many Londoners. They are both issues that we want the new Mayor to tackle.

The West Chiswick and Gunnersbury Society